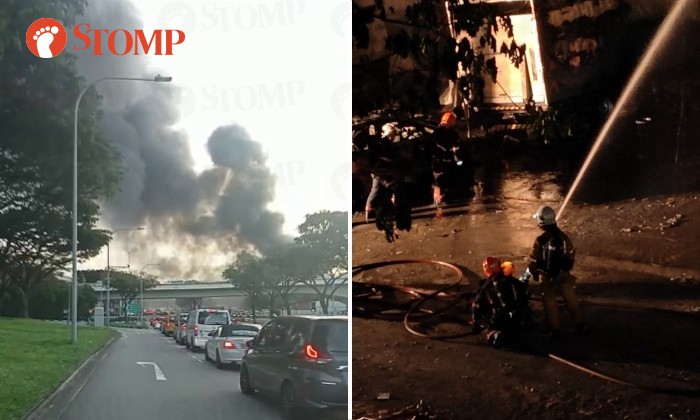 A fire broke out at a vehicle workshop along Defu Lane 12, near Bartley Road East, on Friday evening.

The Singapore Civil Defence Force (SCDF) said in a Facebook post on Friday it was alerted to a blaze at 53 Defu Lane 12 at about 6.40pm.

It added the fire involved multiple vehicles parked within the premises, and the area affected by the fire covered about 10 metres by 10 metres.

It said: “SCDF firefighters deployed three water jets to contain and prevent the fire from spreading to neighbouring units. The fire was extinguished in about an hour.”

When The Straits Times arrived at the scene, firefighters were dousing water over large blackened trucks parked outside a unit bearing a sign that read Yong Sing Motor Works.

Its director, Mr Sim Seng Cheng, 61, told the media in Mandarin that at about 5pm a supervisor called to tell him a fire had broken out there with 20 employees inside.

He was told one of the workers was spray-painting a van when a nearby motor exploded. The motor was in a grilled enclosure and the workers were unable to get close to it.

While some workers tried to douse the blaze through the grill, with a fire extinguisher, the other workers drove the vehicles out of the workshop.

But the fire could not be put out.

An association member at the neighbouring Hong San Temple, who declined to be named, said he heard a loud boom at about 6.30pm while he was watching the World Cup match between Wales and Iran with nine others.

The 68-year-old said: “There were already many people gathering around outside. We heard three or four more explosions that made us jump.”

He added he saw four or five workshop employees running and shouting.

He described the flames as reaching higher than a three-storey building next to the temple when an SCDF fire engine arrived.

Mr Sim said Yong Sing was moving to a nearby workshop at Block 8 Defu South Street and will continue operating from there.

He said: “I don’t have any details on the compensation yet. But I’m just glad no one was hurt.

“Life is more important than business. If someone had lost his life, I wouldn’t know how to tell his loved ones.”