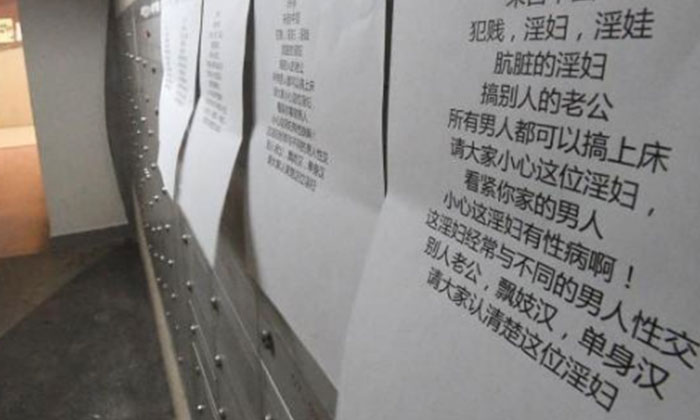 Some defamatory posters have been pasted on the letterboxes of a Housing and Development Board (HDB), accusing a woman of seducing a married man, and calling her a ‘prostitute’.

Shin Min Daily News was alerted by a reader to the incident at the void deck of Block 416 Ang Mo Kio Avenue 10.

The reader said that there were 11 posters placed up.

Read the posters: "This woman from China seduces someone else’s husband and will sleep with any man.

"Please be wary and keep your eye on your husband.

"Be careful as this prostitute has sexually transmitted diseases (STDs)!

"She often has sex with different men, including other people's husbands.

"Please beware of this woman!"

Reporters later visited the block and discovered that four of the posters had been torn off, leaving just seven.

The posters bore the name of the woman but left out other details such as her address and contact number.

Reporters spoke to several residents in the area, but none of them knew the woman mentioned.

A resident, Madam Chen, said that she first spotted the posters on the letterboxes at around 9am on Sunday (April 8).

She feels that the posters hinder residents from accessing their mailboxes.

Other residents feel that the posters were ‘vulgar’ and a bad influence on the children in the area, not ruling out that they may call the police.

The incident marks the fourth since November 2017.

Similar incidents have happened in Telok Blangah, Punggol, and Woodlands, with different people being named and shamed.

It is noted that all the cases were, however, related to relationships and alleged extramarital affairs.

Mr Lan said that placing up posters in public without a permit can be considered as an act of vandalism.

Furthermore, if the posters display personal details of others, it can be considered a breach of the Protection from Harassment Act.