Deer caught in headlights on BKE: It can be unpredictable when startled, says Acres 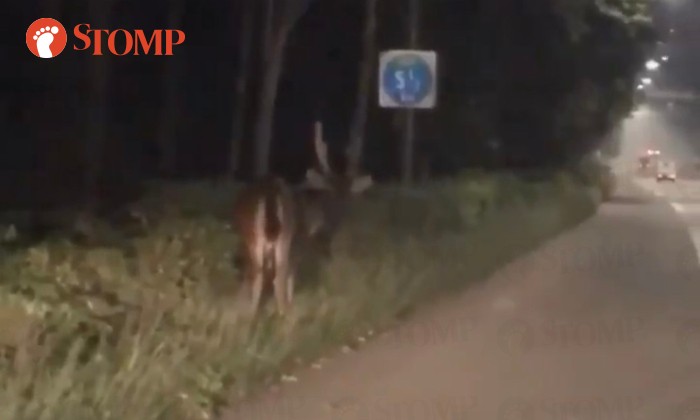 A deer was caught in headlights (literally) along the Bukit Timah Expressway (BKE) on Saturday (August 1).

Stomper Vqinz shared a video that his friend took at around 3.30am of a deer that he spotted while driving along BKE.

In the video, the deer can be seen on the grass patch at the side of the expressway.

It later jumped back into the forested woods.

"We actually saw four deers, but only managed to catch the last deer on camera," Vqinz told Stomp.

"I have seen deers along the BKE three times. Sometimes, they appear at around 3-5am."

In response to a Stomp query, Mr Kalai Vanan, deputy chief executive officer of the Animal Concerns Research and Education Society (Acres), said: "The deer in the video is a Sambar deer.

"There is a small population of them existing in Singapore within the central nature reserve.

"It is not a common sight to see them on the expressways, but they have been sighted along roads which are fringing the reserves."

Mr Kalai also shared that while it may be fascinating to see such large mammals on our tiny island, Sambar deers are wild and can be territorial.

They can also be unpredictable when startled.

"We urge the public to not approach them," he said.

"Motorists should also never stop their vehicles on the expressway to take videos of them.

"The animals may get startled and run onto the roads.

"Road traffic accidents are a big threat to the deers and can be dangerous for motorists when the animals cross roads from one forested area to another," Mr Kalai added.