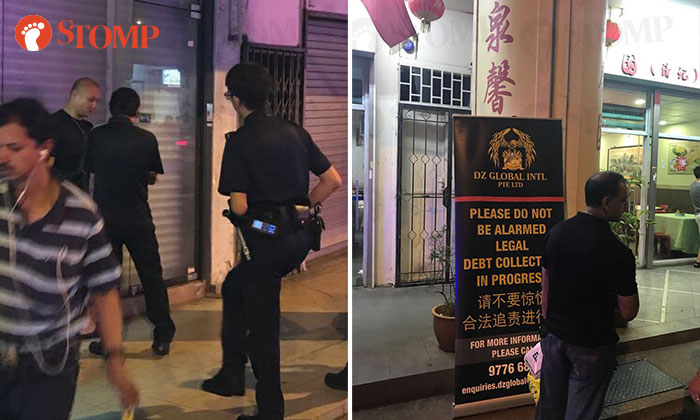 A group of debt collectors gathered outside a restaurant at 252 Jalan Besar yesterday (July 15) between 9.30pm to 10.45pm.

Stomper Lester who was having his dinner in the vicinity took some pictures and sent them to Stomp.

He told Stomp in a phone interview that the men carried a large signboard saying, "Please do not be alarmed. Legal debt collection in progress."

Lester said that the men were creating a ruckus, disturbing many diners who were having their meal nearby.

Later on, police officers arrived at the scene and questioned the men before leaving.

However, the men continued lingering in the area even after the officers left.

"There were about 10 men. They were creating a scene, and even stopping passing vehicles.

"I feel that they should have settled this amicably. Dragging in everyone else is just not right."

In response to Stomp's media query, a Police spokesman said: