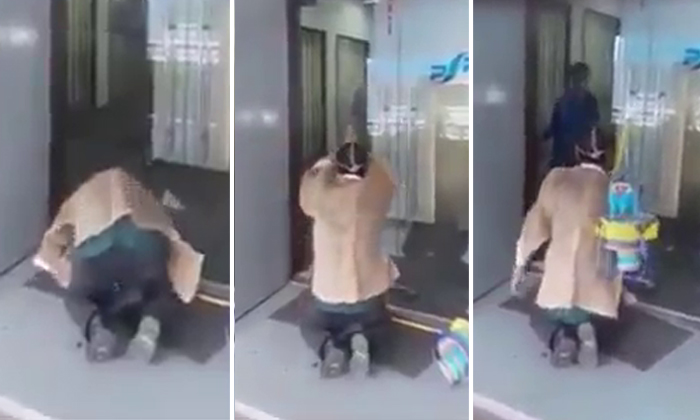 A licensed debt collector donned funeral garb, carried banners bearing a debtor's face and created a commotion outside the man's office to demand monies owed to his client.

He was detained by the police for harassment, but tried to dash out of the police cell and put up a struggle when officers tried to subdue him.

When Peh Chong Wee, 59, was out on bail, he returned to the office to demand repayment with papers printed with the debtor's face stuck to the front and back of his shirt.

On Wednesday (Jan 15), Peh was sentenced to five weeks' jail after he pleaded guilty to three harassment charges and one count of using criminal force on a public servant.

Court documents showed that Peh and another debt collector, Koh Yew Ghee, were engaged by a Ms Lena Lee to collect a debt on behalf of a company, LM Tech Engineering and Construction, in April last year.

Ms Lee is listed as a shareholder of the company, according to Accounting and Corporate Regulatory Authority records.

She provided them with the particulars of a Mr Ooi Swee Khoon, who was a director of PSP Solutions Engineering.

Peh went to PSP Solutions Engineering's office premises in Ang Mo Kio with Koh, 47, to collect the debt on May 27. Court papers did not state the debt amount.

"After they were informed that Ooi was not in, the accused (Peh) banged on the table of the front desk forcefully," said DPP Tay.

The company's human resource manager, Ms Muniyasamy Uthira Selvi, asked them to leave but they refused and Peh proceeded to lie down on the floor.

Ms Uthira called the police, who asked them to leave. They complied, but returned to the premises a few days later on May 31.

This time Peh was dressed in "a traditional Chinese funeral outfit and carried a banner with the face of Ooi printed thereon", said DPP Tay.

"The accused was blowing a whistle and shouting loudly while walking along the corridor," he added, noting that it caused a commotion outside the office.

Peh and Koh left before the police arrived, but Peh was arrested on the same day and detained in the police's Woodlands Division.

When auxiliary police officers attempted to transfer him to a different cell, Peh rushed out and pushed an officer against the wall while putting up a struggle, but was restrained.

He was later released on bail.

But on June 21, Peh returned to the office premises with his banners even though a district court had ordered him on June 14 not to loiter or enter any place frequented by Mr Ooi.

Peh also had paper pasted on the front and back of his shirt which bore messages demanding for loan repayment along with pictures of Mr Ooi's face.

He paraded around the corridor for about 30 seconds.

District Judge Toh Han Li took into account four other similar harassment charges and one public nuisance charge, all relating to this case, during Peh's sentencing.

In a description for one of these charges, Peh was said to have rode a bicycle with incense paper and two poles each carrying a banner bearing Ooi's face, near a condominium believed to be the latter's residence.

For harassment, Peh could have been jailed for up to six months and fined up to $5,000.

Koh has also been charged with harassment and his case will be heard in court later this month.