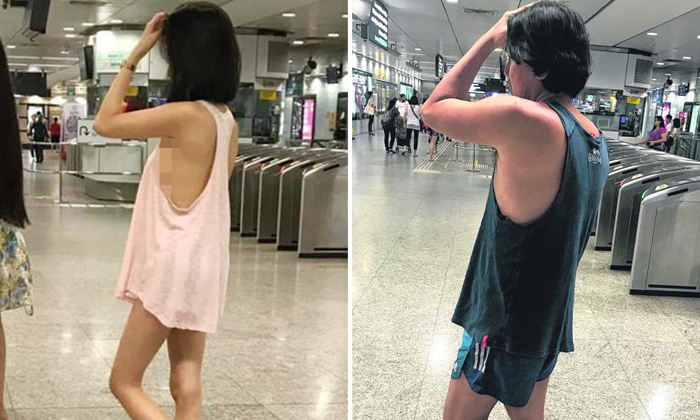 Clothes maketh the man while the lack of clothes can make a woman famous.

I mean, you were just queuing for the ATM at the Somerset MRT station and minding your own business - except that you were wearing a low-cut, side boob-revealing tank top with no bra, which apparently made it everybody's business.

Someone took pictures of you and posted them online, where they went viral and it's easy to see why.

It's like having your tart and eating it too.

I don't think it was a coincidence that also last week, a buaya was spotted at Lower Seletar Reservoir. ("Buaya" is Malay for crocodile and also means… maybe you can ask a Singaporean friend to explain that joke to you.)

Lianhe Wanbao even put your picture on its front page because, you know, slut-shaming is news.

At least no one is accusing you of a cover-up.

You probably beat the Hyflux CEO as the most controversial woman in Singapore last week. Congrats.

I suggest you avoid Gojek if you don't want to get any more famous. And it's not because you're Chinese.

On Tuesday, it was revealed that you're a model from the Philippines, thanks to your Facebook post: "Yes, this was me waiting in the ATM queue. I was not aware that somebody took a photo of me (I don't personally know his purpose).

"I apologize if I offended any culture on this outfit, but, please understand that I do not have any obscene or malicious intention by wearing it. I am sorry if you think that this was an 'indecent exposure' but, it was not my intention.

"To those people who are already hitting me below the belt and criticizing me of something, I respect you. You are already telling things which are too personal that is already outside of what you see in the picture.

"I was already cyber shamed, bullied and threatened by several people because of this.

"PS. I was wearing shorts and nipple tapes during that time. Peace, mwah!"

As someone who has often been criticised for my appearance and cyber-shamed (for this column), I sympathise.

Singapore is so hot. You have to dress for the weather, right?

To show my support for you, I am posting photos of myself queueing for the ATM at Somerset MRT station wearing a side boob-revealing tank top with no bra.

Except I have no side boob to reveal (just the boob that I am and some armpit hair). So I went without nipple tape.

But I did wear shorts because I didn't want to get arrested.

Peace and mwah back.