Dear kind soul, the injured elderly Stomper you helped at Chinese Garden wants to meet and thank you with a big hug 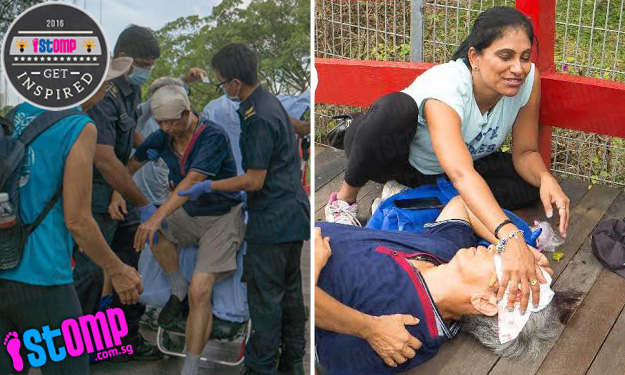 The kind-hearted woman who aided Stomper Yeong has written in to Stomp to identify herself.

Stomp will be arranging for them to meet in person.

Stomper Yeong was at Chinese Garden on Friday morning (May 27) when he fell and injured his head.

What happened next, however, left him extremely touched.

The 69-year-old recounted what happened in an email to Stomp:

"I stepped on an uneven surface and tripped during my morning walk.

"I stumbled towards the side of a bridge and my head probably hit the railing at the side.

"I sustained a cut just above my eye and was bleeding.

"She attended to me throughout and covered my wound with a towel. She insisted that an ambulance should be called and helped me relax until it arrived.

"I would like to meet the woman face-to-face to express my heartfelt thanks with a big hug."

"Unfortunately, I could not recall her name, but I think the Good Samaritan is from a  government-related agency."

Kindly contact us at stomp@stomp.com.sg if you have information about the kind soul that stopped to help the injured Stomper.