Dead cat? No, just a super relaxed kitty that kids covered in leaves to protect it from cold 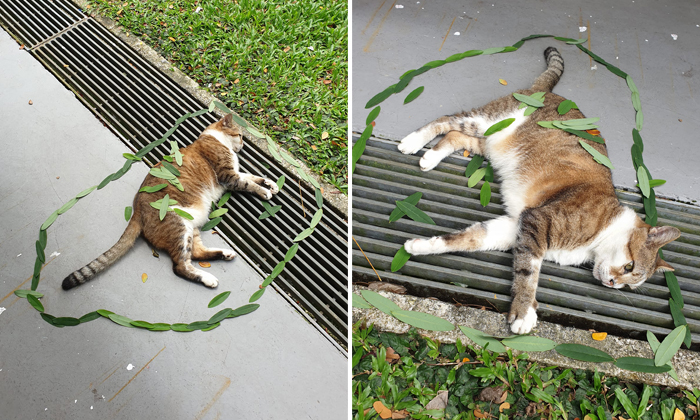 A woman was shocked when she saw a cat lying motionless on the ground with leaves scattered on and around its body.

Her fear soon gave way to warmth, however, when she realised that a pair of thoughtful children were behind the unusual sight.

Facebook user Veronica JL Ng recounted how she had visited the community cat "as usual" on Monday (Dec 20).

She said: "I drove over to comfort him as usual. From afar, I got a shock seeing him like this... I thought for a second that it was a 'corpse'. Fortunately he moved!"

Ng also saw two young sisters placing leaves on and around the feline.

Ng also shared stories about the cat with the sisters, who looked to be around six and seven years old.

She added: "One of them felt that the leaves were not enough. She informed me, 'I am going to get more leaves.'

Photos posted by Ng show the cat looking unperturbed by its new get-up and simply lying sprawled on the ground.

"Mr Kitty is totally cool about being covered in leaves," said Ng in her post.

"I love children who love to do nice things for cats and dogs. This really made my Monday!!!"

When contacted by Stomp, Ng said that she has known the cat for around seven years. However, she declined to share its location.

Her post has been shared over 700 times, with many netizens saying that the photos initially gave them a shock too as the cat looked like it was dead.

One user quipped in humour: "Kitty is safe and alive... But many of us almost died from the pics..."