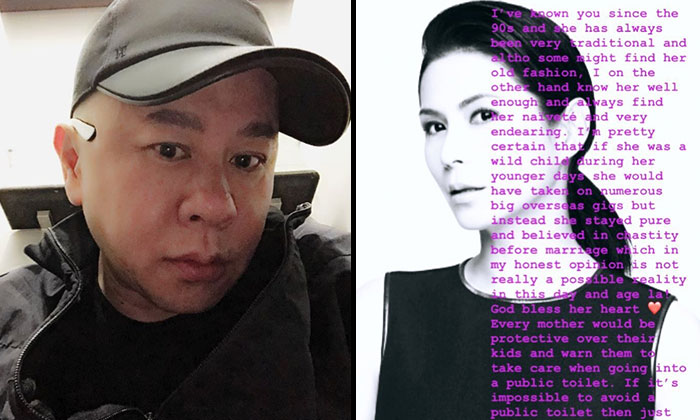 Celebrity hairstylist David Gan has chipped in on the feud between Pan Ling Ling, Hong Huifang, lending his support to Pan who he said was merely being protective.

This comes after Hong declared the end of her 20-year friendship with Pan, sending out a lengthy WhatsApp message to around 50 mutual friends which alleged that she and her family have been “bullied” by Pan.

In her message, Hong accused Pan of blabbing about an unverified romance between actress Julie Tan, 25,  and Hong’s son, Calvert Tay, 18, at a dinner with other friends from the entertainment industry last month.

Hong also said that Pan allegedly told Calvert Tay to get vaccinations against sexually transmitted diseases (STDs) due to his alleged relationship with Tan.

Hong claimed that Pan had made the comment due to Tan’s past relationships, with Tan accusing Pan of bullying.

Although Pan denied asking Calvert to get vaccinations against STDs, she subsequently apologised to both Tan and her parents.

Gan’s comments which were posted on Instagram on Saturday night (July 28), came just as the dust was starting to settle on the issue. 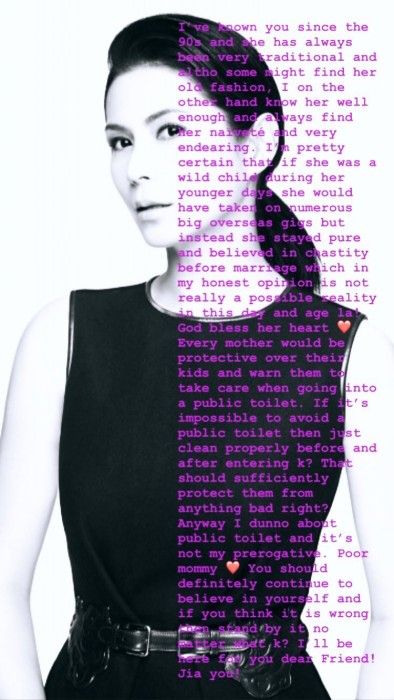 “I’m pretty certain that if she was a wild child during her younger days she would have taken numerous big overseas gigs but instead she stayed pure and believed in chastity before marriage which in my honest opinion is not really a possible reality in this day and age la!

“God bless her heart (heart sign). Every mother would be protective over their kids and warn them to take care when going into a public toilet.

“If it’s impossible to avoid a public toilet then just clean properly before entering k?

“That should sufficiently protect them from anything bad right? Anyway I dunno about public toilet and it’s not my prerogative.

“Poor mummy (heart sign) You should definitely continue to believe in yourself and if you think it is wrong then stand by it no matter what k? I’ll be here for you dear friend! Jia you!”

Gan added that people can interpret his post any way they wanted.