Daughter of man who killed her husband: "He loved us so much that he snapped" 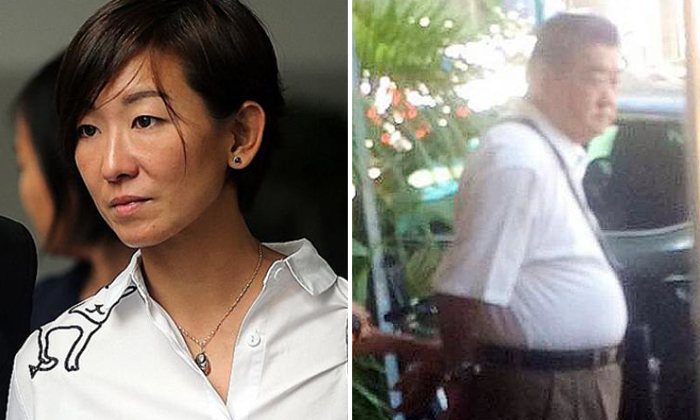 She would have been relieved when her father escaped the gallows after his murder charge was reduced to culpable homicide.

But Ms Shyller Tan, 46, now faces the dreaded prospect of not seeing him alive again outside prison after he was sentenced to 8½ years' jail on Monday for killing her estranged husband.

When her father, Tan Nam Seng, now 72, was in remand for the 2017 incident, he had numerous medical issues, including tuberculosis and two heart attacks, which needed bypass surgery.

With his jail sentence backdated to his arrest and with the one-third remission for good behaviour, Tan could be out in about 2½ years.

Even so, Ms Tan told Chinese-language newspaper Lianhe Wanbao: "I'm worried I will lose him in prison.

"Two of his arteries are 95 per cent blocked. He now wears a bottle of pills around his wrist to buy himself some time in case of another heart attack."

She added her family has always been worried about her father's health.

On July 10, 2017, Tan stabbed his son-in-law, Mr Spencer Tuppani, 39, three times in front of a lunchtime crowd at a Telok Ayer coffee shop.

As Mr Tuppani lay dying, he called the eldest of his three daughters to tell her what he had done and that he was not scared to go to jail.

Ms Tan told The Straits Times on Monday that she was driving to work at the time and "went hysterical".

When she arrived at the scene in tears, her father was calmly waiting for the police.

She added that he had not been himself since he found out about her impending divorce from Mr Tuppani.

Their marriage, which produced three children, began unravelling after she found out that Mr Tuppani had a second family with another woman, who bore him two children conceived through in-vitro fertilisation.

Around that time, Tan also found out his son-in-law might be trying to usurp his business that he had entrusted to his daughters and Mr Tuppani, whom he treated as family.

Noting that her father was under great strain, Ms Tan told ST: "He loved us so much that he snapped... no one wanted this to happen."

A psychiatric examination found that Tan's depression impaired his mental responsibility for his actions, leading to the murder charge being reduced.

Recalling the ordeals she has faced in the last three years, Ms Tan said: "I have been under tremendous stress to keep my family in place."

Now a stay-at-home mum, she said she is honest with her three children about what happened. All three were present at Tan's sentencing on Monday and had previously written to the judge to ask for leniency.

Ms Tan said she visited her father regularly in prison, taking the children with her during the school holidays.

But they do not talk about the fatal incident.

"Betrayal is not an emotion that is easy to quell, and I, too, suffered many sleepless nights, but can only imagine it must have been a fraction of what my dad went through," she said.

"Losing everything is devastating, but what I still have today is my dad and my family, and that's what matters."

Ms Tan said her father had refused to postpone the court hearing despite his health woes.

"We asked him if he was uncomfortable or not feeling well... He said no and he was prepared to face his actions and the consequences."