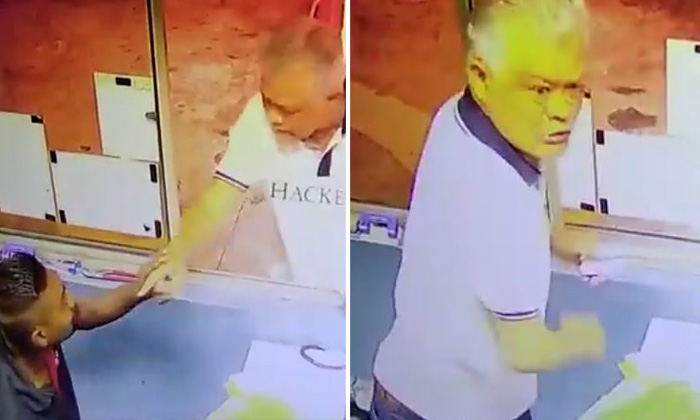 A man who has been identified as a 'Datuk' was caught on video assaulting a carpark attendant at a five-star hotel in Kuala Lumpur, Malaysia, on Sep 18 at about 9.20am.

According to The Star Online, the incident happened after the parking attendant had refused to raise the parking gantry when the man did not want to pay his parking fee of RM3.

In the video, uploaded by Facebook user Balamoraly Doraisamy, a man wearing a white polo tee is seen talking angrily to a parking attendant.

He then picked up a walkie-talkie from inside the office and threw it at the carpark attendant, before slamming the window shut and making his way into the office.

While inside the office, he proceeded to hit and slap the carpark attendant multiple times.

"The suspect, who drove a Range Rover, came inside the office to scold and hit the victim," said Brickfields OCPD Assistant Commander (ACP) Ruslan Khalid.

The victim, 31, suffered minor bruises following the incident and lodged a police report the next day.

The suspect has also been identified by Facebook users as a director of a local telecommunications company.

ACP Ruslan also said that the 'Datuk' had been identified by Malaysian police and is currently being investigated under Section 323 of the Malaysian Penal Code for voluntarily causing hurt.

While netizens have suggested that the incident happened in a certain five-star hotel in Kuala Lumpur, a spokesman for the hotel said: "We can't confirm that this is indeed here.

"There have not been any allegations made that I am aware of.

"If there were, we will investigate."