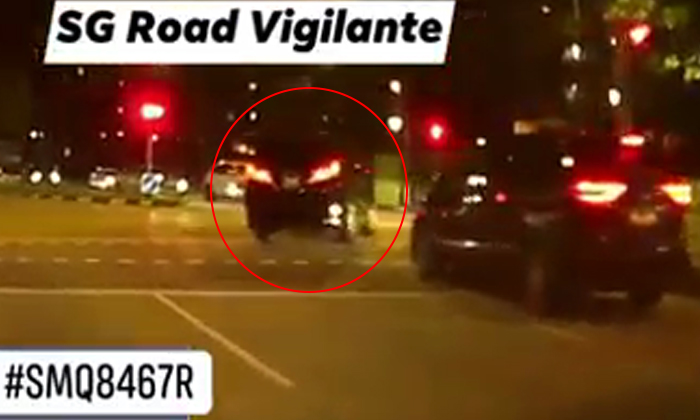 A driver was caught on camera breaking multiple traffic rules, from failing to conform to a red light signal to endangering other road users.

Facebook page SG Road Vigilante posted a video of the incident that occurred along Holland Road on May 15, at around 9pm.

In the video, a Toyota car can be seen travelling on the rightmost lane and ignoring the red light to make a right turn.

Another car that was in front of the Toyota had stopped for the red light, but was overtaken by the Toyota.

The motorist whose dashcam camera had captured the video can be heard exclaiming, "Wow!" at the Toyota driver's behaviour.

Netizens have slammed the Toyota driver and called for enforcement action to be taken.

One user said: "Because of some of these ignorant and irresponsible drivers, accidents that should not happen start to surface."

Related Stories
FB user complains about driver who 'challenged' him, netizens say he deserved it
Cyclist ignores driver and rides across road in Woodlands, but traffic light not even in his favour
Car hits Mitsubishi after cutting across 3 lanes on CTE, police investigating hit-and-run
More About:
reckless driving
dangerous