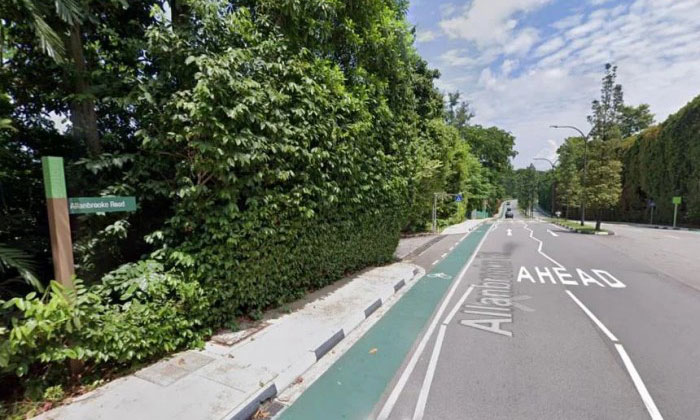 When police officers came to his door looking for his wife, Claus Nicolajsen lied that she was not at home.

The officers had come to the Sentosa Cove condominium unit to give her a breathalyser test after she drove into a lamp post following drinks at a golf club.

Nicolajsen, 45, who is Danish, was sentenced to one week's jail on Wednesday (June 29) after he pleaded guilty to a charge of giving a public servant information he knew to be false.

His lawyer, Mr Ong Ying Ping, indicated he will be appealing the sentence.

Deputy Public Prosecutor Lee Zu Zhao told the court that Nicolajsen's wife, Liu Xia, left home on Oct 22, 2019 to spend the afternoon with her friends at Sentosa Golf Club, where she consumed wine during dinner.

DPP Lee said: "She informed (her husband) that she would be at the Sentosa Golf Club and (he) was aware that she would drink alcohol with her friends."

Liu left the golf club at around 9.30pm to return home and while driving back, collided with the lamp post along Allanbrooke Road and drove off.

Nicolajsen met up with Liu at their car park and also met a Sentosa ranger there, who told him his wife had collided into something while driving earlier.

On Oct 23, 2019, at or about 12.30am, a traffic police officer accompanied by several other police officers, a Sentosa ranger, and a security officer from the condominium went to the couple's unit to speak to Liu.

Nicolajsen, who answered the door, told them his wife was not home but at Holland Village with her friends, a lie he repeated multiple times.

The traffic police officer asked Nicolajsen to call her and the latter went into the unit apparently to do so. He emerged shortly after and said he tried to call his wife.

After speaking with the officer for a while, Nicolajsen expressed irritation that the officer was there speaking to him after midnight after he had repeatedly denied that he had came up the lift with his wife.

Said DPP Lee: "The accused confirmed once more that his wife was in Holland Village and emphasised that he had repeated this statement '500 times'."

After confirming with condominium security officers that Liu had not left the condominium, the group of officers and the ranger went to the back door of the unit and asked to enter it.

Nicolajsen did not allow them to do so and the traffic police officer gave Nicolajsen his name and contact number and told him to inform Liu to report to Traffic Police headquarters later that morning.

A breathalyser test was conducted on Liu at the headquarters on Oct 23, 2019 at around 11am, more than 12 hours after the collision.

"The significant lapse of time resulted in the police being unable to obtain a reliable or accurate test of Liu Xia's breath or blood alcohol level around the time of the accident," said DPP Lee.

On Oct 25, 2019, Nicolajsen went to the Traffic Police headquarters and provided a statement, claiming he did not know where his wife was at that time, but that she had texted him to say she was at Holland Village.

On March 15 last year, Liu was fined $1,400 and disqualified from holding or obtaining all classes of driving licences for three months after pleading guilty to two offences under the Road Traffic Act.

DPP Lee asked for a two- to three-week jail sentence for Nicolajsen, saying: "The accused's false statements caused appreciable harm primarily because he perverted the course of justice by shielding Liu Xia from possible prosecution for drink driving and a potential conviction and mandatory disqualification from driving."

Mr Ong objected the imposition of a jail sentence for his client, saying it was not appropriate to infer that Nicolajsen's knowledge about the accident translated into him knowing that his wife was being investigated for drink driving.

Said Mr Ong: "I would agree that the custodial threshold would be crossed if the (traffic police officer) had stated he was investigating Ms Liu Xia for drink driving and the accused responded with that false information that she was in Holland Village. But this not what happened here."

Nicolajsen will be out on bail pending the outcome of his appeal.

For giving information he knew to be false to a public servant, Nicolajsen could have been jailed for up to two years, fined, or both.

Related Stories
BMW driver arrested for suspected drink driving after knocking down woman at Sims Avenue East
Repeat drink driver offered $1,000 bribe to cop: 'Whatever you want, I will do for you'
Man hurls vulgarities, taunts police and resists arrest after dispute at Balestier Road
More About:
drink driving
lying
sentosa
court
jail