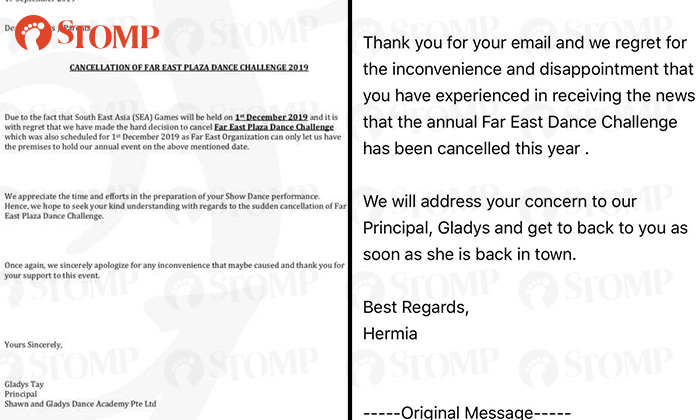 A dance student felt "misled and conned" after being informed that Far East Plaza Dance Challenge, an event she was preparing for, got cancelled.

After several failed attempts in reaching out to the student, Shawn and Gladys Dance Academy has decided to provide a refund out of goodwill.

According to Shawn and Gladys Dance Academy, the Far East Plaza Dance Challenge is a friendly regional dance competition which is usually held annually on the first or second weekend of December at Far East Plaza.

Stomper Lim said: "The academy told us we will be putting up a performance at the end of December for the Far East Plaza event.

"We even had our costumes measured and made."

The students were then informed via WhatsApp on Sep 16 that the Far East Plaza event was cancelled.

The message said: "Regret to inform you that there's no annual Far East Plaza Dance Challenge be held this year, due to many dancers traveling in December for the DanceSport South East Asian (SEA) Games.

"Our school decided not to hold in order to not conflict with the dancers' SEA GAMES preparation.

"However, we will definitely keep you all updated if there's any other plan end of this year.

"Thank you for your kind understanding."

"I felt very angry. I hope to be compensated in some way. The school fees weren't cheap. I felt conned and misled," said Stomper Lim.

Shawn and Gladys Dance Academy then said in another WhatsApp message that they were trying to reach out to external vendors to ensure that their students would have opportunities to showcase their dance talents.

Following this, Lim received a document regarding the event's cancellation.

Lim added: "They robbed us of basic respect. I mean since the SEA Games is set in Dec, it should've occurred to them that it could potentially clash with the Far East Plaza event.

"Such ill-prepared planning and careless attitude. By taking the matter so lightly the school is hurting me with their sore lack of mutual respect as a student of their and as a human being. They think we are so hard up for performance.

"Collected fees then in the end the most cancelled lor. What can we do right?"

In response to a Stomp query, a Shawn and Gladys Dance Academy spokesperson provided a statement to Stomper Lim:

"Thank you for your feedback and we are sorry that you felt “cheated”.

"However, after a thorough analysis of your records with us and considering the rationale with which we made our decision (some of which was not shared publicly), we firmly stand that there was neither intention nor action to cheat.

"We have tried to reach out to you multiple times to clarify this but you have denied our calls, and now we resort to a written statement.

"Our dance academy hosts many competitions and events throughout the year, one of which was the “Far East Plaza DanceSport Challenge”.

"This needed to be cancelled because of conflict with the Southeast Asian (SEA) Games and other reasons.

"While you may not be able to perform your choreography there, saying that your “money…[has] evaporated into thin air” or efforts have “gone down the drain” is thoroughly misinformed.

"You will be able to perform your choreography at the World DanceSport Federation Medal Examination just a few weeks in advance of the initial event, as well as at other competitions such as the President’s Cup in April 2020, and were given everything that your money was meant to go towards - instructors’ time, effort, and your learning of technique and dance choreography.

"Moreover, we would like to remind you that the Far East Plaza event was not a part of the Latin Show Dance or Beginners Samba course description, as they are group classes that teach technique and show choreography applicable to a wide range of events.

"Furthermore, registration for the Far East Plaza DanceSport Challenge has not yet begun, and the event was cancelled nearly two months in advance.

"Our dance academy takes all possible steps to address our students' concerns.

"Out of good will, we would like to offer you a FULL REFUND of SGD335.00 for the classes which you have paid for and benefitted from.

"Kindly let us know when you will stop by to collect the refund, or send us an address and name which we can address a cheque to."