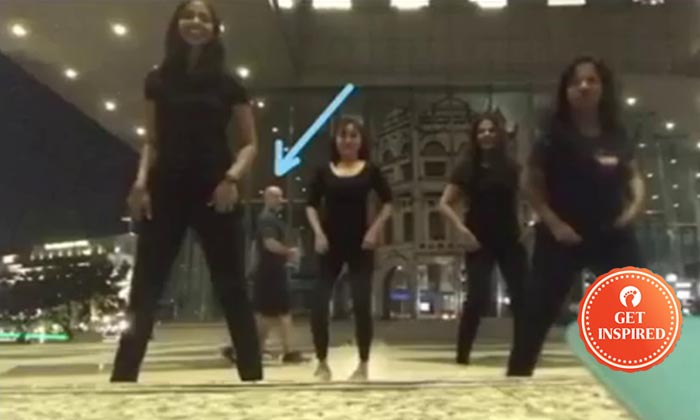 Remember the dance group who were looking for a man that spontaneously joined them in their practice at UOB Plaza on July 13?

Previously, Stomper Yinyin and her friends, who are dancers of Dancebook+, were rehearsing for their performance at a charity event at Gardens by the Bay on July 20.

Since then, their charitable streak hasn't let up.

Yinyin was so encouraged by Stompers who helped to share the news to find the man and felt a special sense of togetherness.

She told Stomp: "Because of this, we wanted to organise a flash mob to convey the message that dancing is for everybody. It's for fun and not for other reasons people think about.

"We got to know a group of cancer survivors through charity events who volunteer their dancing as a way of giving back to society.

"We were very touched and decided since we're doing a flash mob, we should make it more meaningful. We decided to find ways to fund Singapore Cancer Society and thought this could make everything more meaningful with such a good cause.

"We hope that people can be more aware of the difficulties cancer patients go through and the impact is not just on them but on their families and friends as well. There is a lot of impact be it social, emotional, financial, etc.

"Hopefully with Stomp, our fundraising efforts can be shared to get more people to join in the flash mob and bring people together to make it more impactful."

Yinyin has started a Facebook group, danceBOOK+ : Flash Mob of Stomp Community, to discuss details on the flash mob which will be occurring at 7pm on Oct 19 in Orchard Road.

She told Stomp: "An instructional video of the flashmob and the schedule of the free training sessions for the flashmob will be shared so that all can join in."

Visit this link if you'd like to make a donation towards danceBOOK+'s fundraising efforts.

Related Stories
Dance group looking for man who crashed their rehearsal at UOB Plaza to join them in their next video
Feelin' it: Auntie breaks into a dance at Ang Mo Kio Hub
Not just putting out fires and saving lives: SCDF can also sing, dance and act
More About:
get inspired
heartwarming
kudos
inspiring
dance
dancer