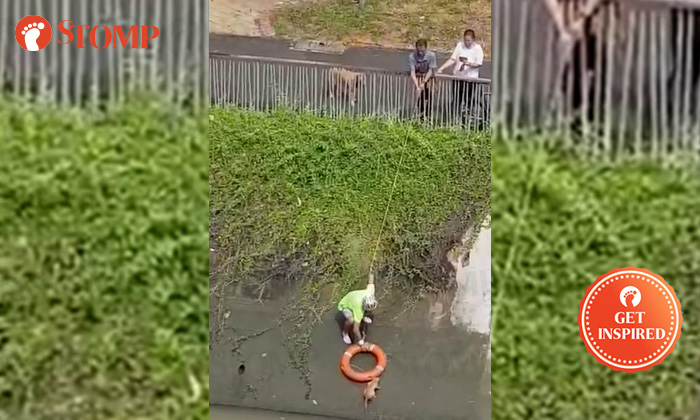 A cat was saved by cyclists after it was spotted struggling in the waters of a canal at Pasir Ris St 11 at about 11am on Sunday (2 Sep).

The cat was first spotted by Stomper Mel, who was cleaning her window ledge on the 8th floor of the HDB flat opposite the canal.

According to her, it had been raining previously which led to the strong currents in the canal.

In a phone interview with Stomp, Mel said that she first noticed the cat struggling in the water while its paw was holding on to a pipe opening.

"I screamed for one to two minutes for passers-by to help and even waved my pink towel for attention", she said.

Luckily, two cyclists noticed her cries and stopped to attend to the drowning cat.

A foreign worker who was resting at the block opposite also came over to render his assistance.

In the video, two passers-by can be seen peering over the edge of the canal to help the cat.

One man had climbed down to the edge of the parapet to give a lifebuoy to the cat.

The cat, who initially looked afraid and cautious, eventually climbed onto the lifebuoy and made its way to safety after about a minute of coaxing from the passers-by.

In response to a media query from The Straits Times, she expressed her thanks to the Good Samaritans:

"I wish I could get in touch with them."

Related Stories
Cat plunges 11 floors to its death after slipping out of net at Jurong West block, SPCA reviewing case
Found: Woman offering $2,000 for cat that "cannot cope with being outside on his own"
Man offering $500 for cat that ran out of house at Alexandra Park: "Our dogs miss him desperately"
More About:
cat
drown
animal rescue
heroes
heartwarming
kind-hearted
inspiring
kudos