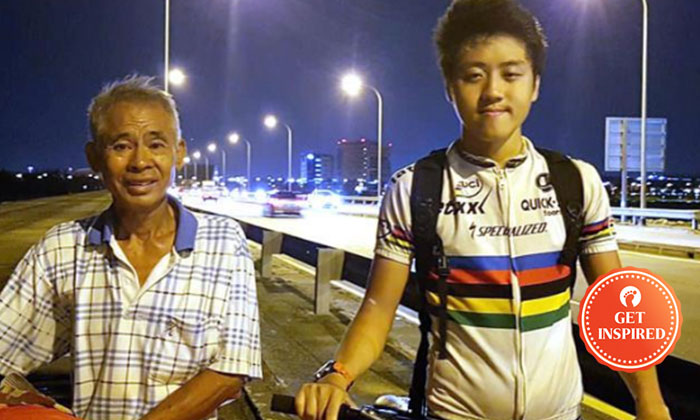 A group of cyclists was approached by a rag-and-bone man who had lost his way, and two of them walked 6km with the man to ensure that he found his way back.

The incident happened at Yishun Dam on the night of Feb 28.

In a post by Facebook user Ray Ang on Love Cycling SG’s page, he recalled how the elderly man had approached the group, asking them how to get back to his home in Yishun.

Ray then lent the man his phone so he could call his wife, but she did not pick up.

“Unwilling to let him wander and starve all night, me and my friend Kwek Jun Yuan walked 6km slowly to get him and his goods home to Yishun.

“May he ride safe always, and remember the love of fellow cyclists and the true spirit of the Loop.”

Although the two cyclists were exhausted from their efforts, they said they felt that it was meaningful.

Netizens have since responded to the post, with many complimenting the two for their kindness.

“You did great… massive kudos.”

“Ray and friends. This is by far the best post I have read. You folks have done well. It’s humane. I salute and respect. SG needs more people like you.”

Others expressed sympathy for the elderly man for having to travel so far and work so late.

Related Stories
Man trapped under bus at AMK industrial park rescued thanks to 10 passers-by
Why SBS bus captain helped injured uncle at bus interchange when no one else would
Woman stranded after forgetting wallet -- so SBS Transit employee adds $10 to her card from his own pocket
More About:
inspiring
cyclist
bicycle