Cyclist who saved young child from oncoming traffic shares his side of story: 'I’m not his dad' 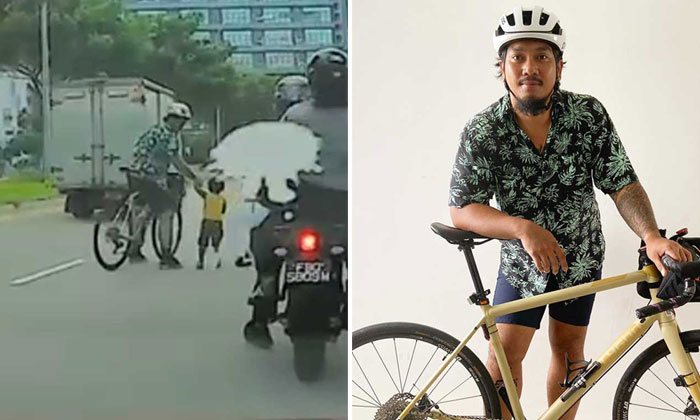 A cyclist who stopped his bike in the middle of a busy road to save a young child has shared his side of the story. And there’s something he needs to clarify.

“I’m not the father of that child,” Zwan Giant, 35, told Business Insider in an interview over Facebook Messenger.

The technician – who was identified on Facebook by his wife as “the brave cyclist who save the kid”- added that another man seen waving at oncoming vehicles while standing on the road divider was also unlikely to be related to the child.

In the dashcam video posted on the Singapore Roads safety/Roads safety.SG Facebook page, a young child can be seen riding a kick-scooter in the middle of a three-lane road as large vehicles whizzed past him.

Zwan, who was riding his bicycle on the leftmost lane, rushes to grab the child and stop him from moving forward. Just seconds later, a lorry on the same lane swerves to the left to avoid them.

The quick-thinking cyclist then picks the child up from the road and swiftly moves the child, himself, the child’s scooter and his own bicycle to the pedestrian pathway.

The video, which cuts off at this point, has garnered hundreds of comments on Facebook, with many questioning why the child was allowed on the road in the first place. Some netizens pointed the finger at the cyclist as they assumed that he was the parent or guardian of the child.

Unfortunately, this was an incorrect assumption.

When contacted, Zwan told Business Insider that the incident happened at around 5.40pm on Friday (May 15).

According to Zwan, he saw the small Indian boy moving from the park connector to the road via an opening on the pavement along Yishun Avenue 8.

When this happened, Zwan waved to the vehicles behind him to stop, and “without thinking”, stopped to pick the child up.

He added that he chose to stop abruptly in the middle of traffic as there was an urgent need and very little time to get to the child, who he estimates is around three to four years old.

“I asked (him): ‘Where’s your mom and dad?’ But he kept screaming and crying,” Zwan said.

It was then that he saw a woman, presumably the boy’s mother, running towards the child from a distance of about 30 to 40 metres away.

He then told the woman to “take care of your child” before continuing on his journey.

“That’s all I wanted to do – save him before anything. But it’s funny how people misinterpreted me being the father. How could a sane father let his boy scoot to the road and (yet cycle along the roadside by himself)?” Zwan said.

According to the Land Transport Authority’s website, non-motorised personal mobility devices such as kick-scooters are not allowed on roads.