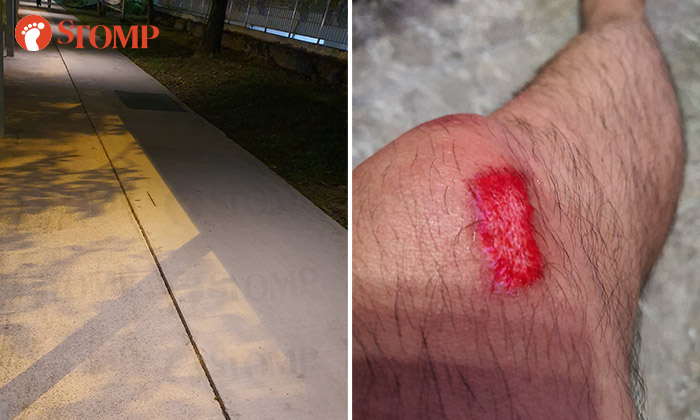 A cyclist sustained a scrape on his knee after crashing at an "uneven" pavement along Punggol Central on Friday night (Jan 3).

Stomper Kenny had his seven-year-old daughter on the bicycle at the time when the accident occurred.

He contributed photos of his injury and the accident site and told Stomp: "We were going towards Waterway Point. This happened between lamp posts 37 to 41.

"That night, I couldn't really tell that the pavement was of different heights because both sides were the same colour.

"My bike went against the protrusion and my daughter and I fell off the bike and landed sideways onto a grass patch.

"Fortunately, my daughter wasn't injured. She was just shocked. Luckily we landed on the grass.

"Some people came forward to help us as well.

"I usually cycle on a pavement on the opposite side of the road but it was late and I thought it would be too crowded with pedestrians so I decided to cycle along this one.

"This isn't my first time cycling along this path but it's the first time I had an accident here.

"I went to a polyclinic and had an x-ray done. The doctor told me I could have sustained a fracture in my right arm.

"I can use my arm as per normal just that there's a bit of discomfort when I straighten or bend it.

"The doctor suggested that I go to a hospital but if I can move my arm, I probably won't.

"Then again, I've never experienced a fracture before, so I'm not very sure.

"This path is very dangerous for cyclists. It's not poorly-lit but at least make this uneven pavement more visible."