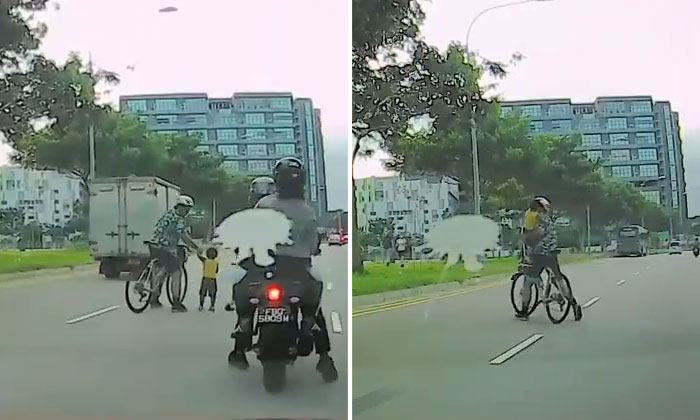 A small child was caught on video riding a kick-scooter in the middle of a road in Yishun.

Fortunately, a brave cyclist stopped and managed to pull the child to safety before an accident occurred.

A video of the incident was posted on Facebook and according to the timestamp, happened on May 15 at about 5.41pm.

In the video, the young child is seen riding a scooter in the middle lane of Yishun Avenue 8.

A man standing on the road's central divider is seen gesturing at the kid.

Upon seeing the child, the cyclist stops and immediately carries the child and the scooter before making his way to the pavement.

Although there is some debate on whether the cyclist is the child's father or not, most netizens have praised the cyclist for risking his own safety to rescue the child.

They also questioned where the child's parents or guardians were and how he ended up on the road.

According to the Land Transport Authority (LTA)'s Active Mobility Act, riding a scooter on the road is illegal.

Manual kick-scooters can only be used on footpaths and cycling paths.

Related Stories
Heart-stopping moment as child recklessly crosses road when traffic lights are not in her favour
Child on the loose bring motorists to a halt
Child nearly hit by car as he dashes across road at Punggol
More About:
child safety
child
scooter
dangerous
cyclist
hero
Yishun
Road safety