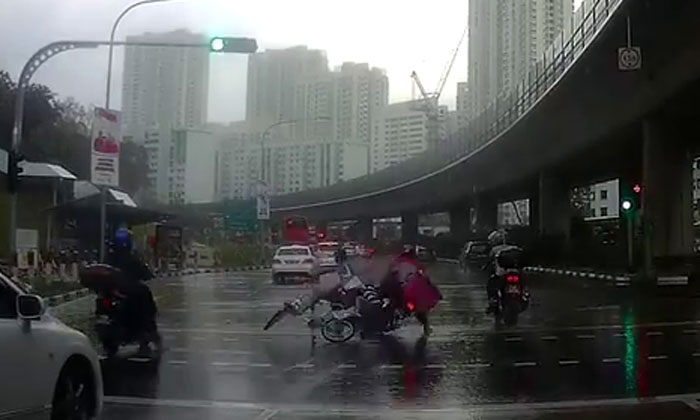 A male cyclist riding with a young boy was involved in an accident with a motorcycle after beating the red light at a pedestrian crossing.

A video of the incident was posted on Beh Chia Lor - Singapore Road's Facebook page.

The contributor, Alex, said that the incident happened at Commonwealth Avenue West towards the city after Clementi MRT Station.

According to the timestamp on the video, the incident occurred at about 4.42pm on July 29.

In the video, the traffic lights had just turned green in the motorists' favour when the cyclist is seen crossing the road while the red man is showing.

A motorcyclist, who is wearing a Foodpanda jacket, skids onto the road after hitting the cyclist causing him and the young boy to fall down as well.

The cyclist gets up soon after and pulls the boy up with him. The biker, on the other hand, is seen trying to stand up but falls back onto the road again, appearing to be in pain.

In the caption, Alex wrote that he hopes the video can help the biker in some way or another.

In response to a Stomp media query, a police spokesman said that they were alerted to an accident involving a motorcycle and a bicycle along Commonwealth Avenue West towards Clementi Avenue 3 at about 4.38pm.

The motorcyclist, a 32-year-old man was conscious when conveyed to National University Hospital (NUH).