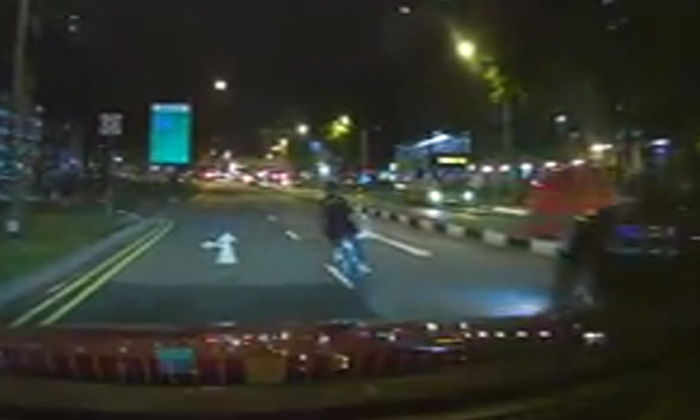 A young cyclist almost got into an accident with a car at 10.36pm on July 31, by swerving left and right in the middle of a road in Woodlands.

A Stomper alerted Stomp to a video of the incident that was posted on Beh Chia Lor's Facebook page.

In the video, the boy is seen riding in the centre of a lane, before suddenly going towards the middle of the two lanes.

He veered to the right when a black car went past him.

The boy then turned left towards a parking lot.

According to a timestamp in the video, the incident apparently took place at 10.36pm on July 31.

The location appeared to be somewhere in Woodlands, as seen by several street signs in the clip.

A caption that accompanied the post chastised the boy for his complacency and warned parents to "please educate your children".

Although several netizens also reprimanded the boy's dangerous behaviour in the comment thread, some of them also spoke up for him, claiming that it was the driver's fault for causing the boy to panic and switch lanes.

Related Stories
"Heart nearly jumped out from my mouth," says driver who jammed on brakes to avoid reckless cyclist in Yishun
Man with a death wish cycles on road shoulder of PIE
Cyclist riding with child gets hit by Foodpanda motorbike after beating red light at Commonwealth
More About:
dangerous
cyclist
bicycle
roads
near accident