Cyclist rides across multiple lanes to 'provoke' driver, flexes arms like he's 'king of the road' 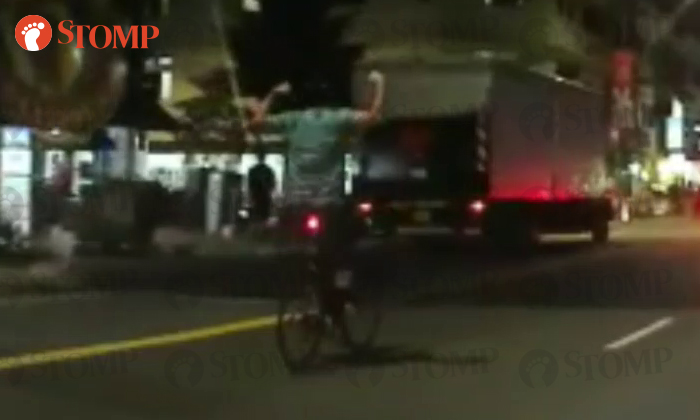 People usually flex their arms as a symbol of strength and pride -- two things this cyclist apparently felt while riding recklessly along Geylang Road.

Stomper Ng, who encountered the cyclist, said the incident occurred "a few nights ago" at around 10pm, though he is unable to recall the exact date.

Ng shared a video of the incident and said: "This cyclist was riding his bicycle without any regard for other road users. Lots of vehicles were honking at that guy."

According to Stomper Ng, the cyclist had been trying to "provoke" him by riding in front of him and flexing his arms.

"He also pointed his middle finger when he was riding beside me, though that could not be captured by my dashboard camera," added Ng.

"He acted like he was king of the road.

"I hope he encounters the authorities on the road so that they can stop him from being a nuisance."

Related Stories
E-scooter rider rips off shirt then throws woman's bike in dispute at Yishun
Cyclist slams his hand on car bonnet after 'refusing to slow down'
Cyclist takes his time to cruise across Cantonment Road even though red man is showing
More About:
cyclist
rude