Cyclist points middle finger at driver, kicks her car and 'runs away' after getting honked at 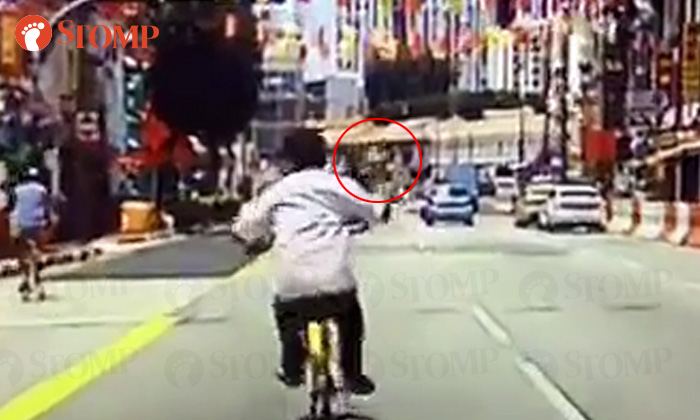 A man was spotted riding an ofo bicycle in the middle of the road and pointing his middle finger at a Stomper who was driving along New Bridge Road on Sep 22 at around 12.15pm.

From a video recorded by the Stomper's in-car camera, the man also kicked the front of the car before cycling away.

The Stomper was at the T-junction of Smith Street when the incident happened.

"I was driving along New Bridge Road when I noticed a cyclist that was cycling in the middle of a four-lane road between lane two and three," said the Stomper.

"As I thought that what the cyclist was doing is dangerous, I honked at him.

"He straight away pointed his middle finger at me.

"When I came to a stop at a traffic light, he came to my left and confronted me with vulgarities.

"He then used his ofo bicycle to hit my front left passenger side and kicked the front of my car.

"As a result, my bumper was dislodged.

"He then cycled away onto Smith Street.

"As I could not follow him due to the fact that my car was at the junction and I couldn't turn into Smith Street, I eventually lost track of him.

"I am hoping that anyone with footage of the incident or is a witness to the incident can help me identify this man."