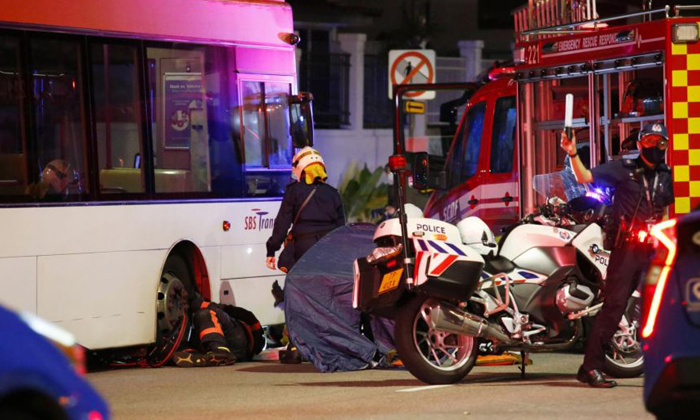 A 31-year-old cyclist was killed in an accident with a bus in Pasir Ris on Friday night (March 19).

In response to a Stomp query, the police said they were alerted to the accident at the junction of Loyang Avenue and Pasir Ris Drive 1 at 10.33pm.

The Singapore Civil Defence Force (SCDF) used lifting equipment to rescue the cyclist but he was pronounced dead at the scene by a paramedic.

Shin Min Daily News identified the deceased as an aircraft technician from the Philippines.

The cyclist was dragged for about 30 metres under the bus, reported Lianhe Wanbao. Photos show his bicycle crushed underneath a wheel of the bus.

Stomper William shared a video that he took at the scene and said: "I saw a body under the bus wheel. It was very, very sad."

Responding to queries from The Straits Times, senior vice-president of corporate communications at SBS Transit Tammy Tan said: "We are sorry that this has happened.

"The bus was travelling straight and about to make a right turn at the traffic junction which was green in its favour when the accident occurred.

"We are trying to get in touch with the cyclist's next-of-kin to extend our deepest condolences and offer our assistance."

SBS Transit is assisting the police in their investigations, Ms Tan added.