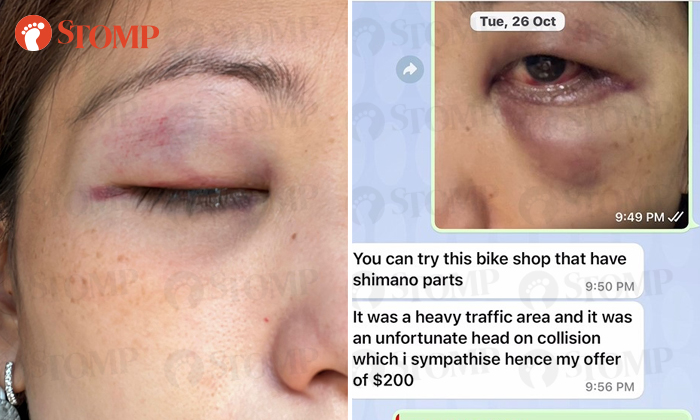 Police are looking into an incident in which a woman was left injured following a head-on collision with a fellow cyclist along Punggol Promenade last month.

The woman sustained facial injuries, photos of which she shared with Stomp.

She also incurred repair costs as her bicycle had gotten damaged in the accident. However, attempts to contact the other cyclist involved have come to naught, prompting the Stomper to lodge a police report. She is also appealing for eyewitnesses to come forward.

The incident occurred along Punggol Promenade on October 23 at around 8am, when the Stomper was riding home in the direction of Punggol Settlement. 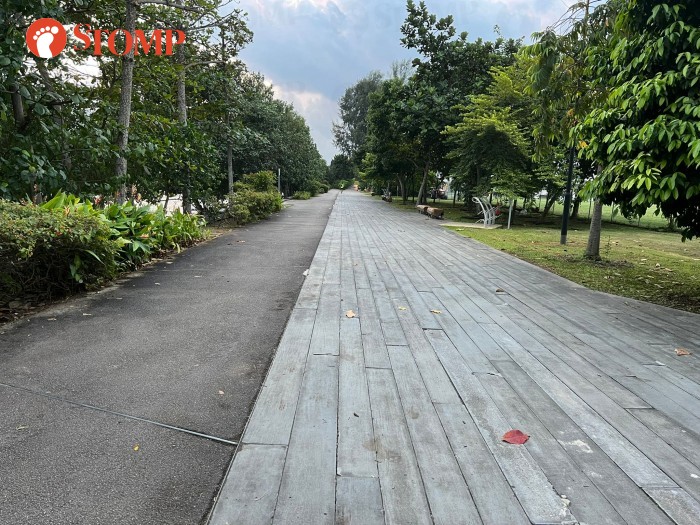 The Stomper, who identified herself as Ms Y, said: "There were about four oncoming cyclists riding side-by-side at about same pace along that stretch.

"Ms Y followed the rule of thumb to keep left. She saw that most of the cyclists had shifted to their left, except for one (Mr CC) who was in her direct opposite direction.

"Ms Y waited for him to shift to his left since she had the right of way. However, by the time she realised that he was not looking straight (he was in fact looking down at his bike), it was too late for her to react with a bell ring, nor could she swerve to her left or right in time.

"She only saw Mr CC looking up and they had a head-on collision. She was hit by the force and fell on her right onto the ground."

The Stomper said she felt the "instant impact" on the left side of her face and "agonising pain", resulting in her having to "stay motionless for nearly a minute" while she recovered herself. 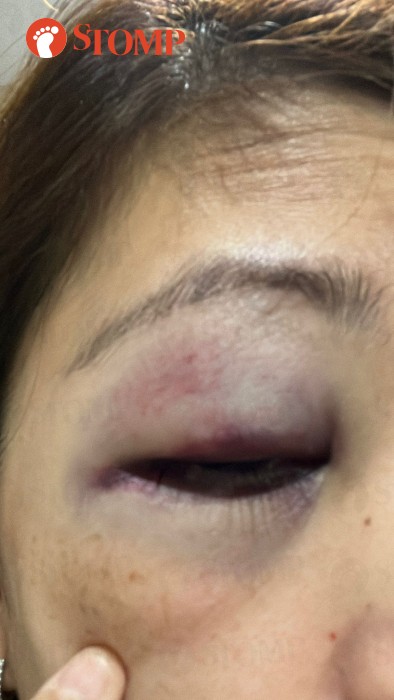 She recounted: "Ms Y remembered very clearly Mr CC asking if she was okay. When Ms Y got up, Mr CC asked the same question again.

"Ms Y told him her that the left side of her face was in pain and he commented that there was a light bruise on her eye. There was no apology given throughout.

"Mr CC then asked Ms Y where she stayed and how she was going back. Ms Y said she would call her husband to pick her up.

"Her bike's front mudguard was broken, with bad scratches on the right handle and a loosened right brake. The rear wheel brake area was also badly scratched.

"Soon after, Mr CC’s companion came. This lady asked Mr CC what happened and he mentioned that he had a collision with Ms Y. He acknowledged that he had been distracted and he felt bad about it. This is only the part that Ms Y would associate with an indirect apology.

"Ms Y also asked Mr CC to check his bike and he put the chain back on the crank. His bike seemed to be working fine.

"Ms Y did not see any physical injury on Mr CC, which could likely be due to him travelling at high speed. The force was huge enough to cause Ms Y to fall and suffer a bruise, as well as cause damage to her bicycle.

"Mr CC then asked Ms Y where her husband would be picking her up. The lady also asked if Ms Y needed them to send her back as they were staying around the area."

The two parties exchanged their names and contact numbers, added the Stomper.

She said: "Ms Y told Mr CC to check his bike again. He checked that it was okay and cycled off.

"Upon reaching home, Ms Y felt chest pains and went to see the doctor. Her left eye was bloodshot for a week and the area was badly bruised. She is currently still waiting to fully recover from the bruise.

"Besides the pain and trauma that she had to go through, Ms Y also had to wear shades for days at work after the accident. It caused her so much inconvenience and distress.

"As the bike shop which Ms Y has purchased her bike from was not open on Sunday (Oct 24), Ms Y could only send her bike in for assessment on October 25 to see what parts to replace and how much to seek for compensation.

"Ms Y initiated a text to Mr CC on October 26, at 8.24pm, to request for compensation. Mr CC asked Ms Y for the cost and she quoted the amount that the bike shop mentioned to her.

"Mr CC then responded that her bike repair was too expensive and suggested that she get a cheap replacement for the parts.

"Though Ms Y is not a bike expert, it did not make sense to her to get cheaper parts just to make do as a working bicycle when her seven-month-old bike is a $2,500 performance bike.

"Mr CC then offered $200 for compensation, stating that both parties were at fault.

"Ms Y was not agreeable to this claim that both parties were at fault, as she had been too shocked in that instant to even have the reaction to ring the bell when she noticed that Mr CC was not even looking up.

"As someone who caused the accident, he did not even have the courtesy to check on her injury with a text of concern between October 23 to October 26.

"Mr CC directed Ms Y to a website to check out the pricing and she did. Ms Y could not commit to an agreement of $200 compensation as she was not sure about the actual cost for the replacement parts. She would need time to find alternatives to reduce repair costs.

"It took Ms Y a few days to check out the price of changing her bicycle's original front wheels and getting the various parts fixed.

"On November 6 at 4.57pm, Ms Y WhatsApped Mr CC to express hope that he can at least pay $300 to cover most of the repair costs with her co-payment. Ms Y noticed that the text was sent and that Mr CC was online but he chose not to read her text.

"She patiently waited till November 8 for a response about closing the case and said she would accept the $200 that he had initially offered. Again, the text was sent and Mr CC was seen online but left her text unread on WhatsApp.

"On the night of November 9, Mr CC blocked her on WhatsApp. Ms Y could no longer see his profile picture nor his online status on WhatsApp.

"Ms Y is very upset that Mr CC has no integrity and did not honour his words. He was not even responsible enough to pay for the claim. She also tried to call him using another mobile number but he did not pick up the calls.

"Ms Y initially had no intention to make a police report and therefore did not take any photo evidence of the accident. She was really going by trust that Mr CC would have good character traits to settle the case amicably.

"However, she was left at her wits' end and had no choice but to make a police report that day." 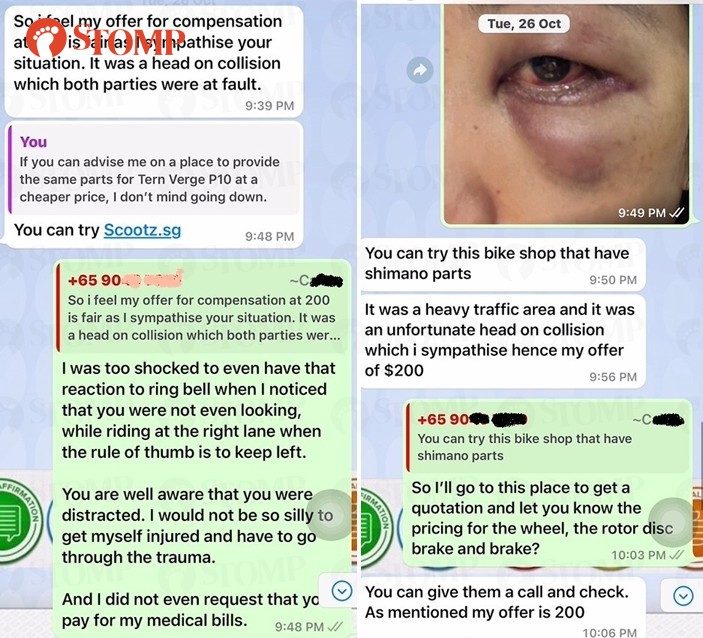 The Stomper hopes that eyewitnesses can come forward.

She said: "The accident scene did not have heavy traffic at that hour. Though Ms Y did not notice many others around, she is appealing for eyewitnesses to the collision.

"It did not occur to her that Mr CC would go missing in action after their brief communication. There were also no photos of the bikes and Mr CC’s particulars were not taken down as Ms Y never thought that she would have to resort to making a police report."

By sharing her experience, the Stomper wants to appeal to cyclists to be alert when cycling and "have the integrity to take responsibility' in the event of any accidents.