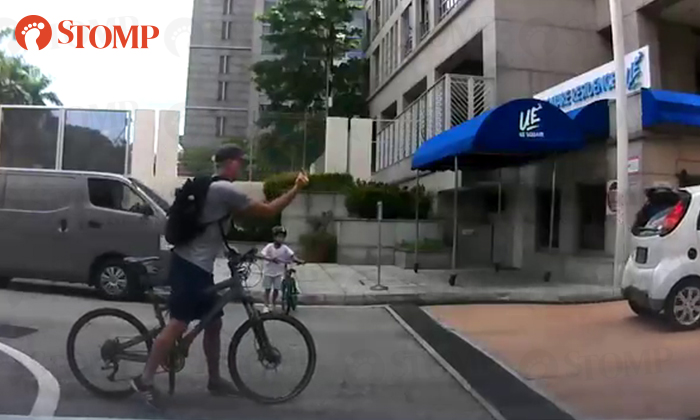 A cyclist was filmed flashing his middle finger at a car when the latter didn't stop for his son who was riding across a road at River Valley.

A Stomper was having his lunch at a coffeeshop near UE Square Residences when he witnessed the entire incident at about 12pm on Saturday (Nov 30).

He contributed a video of what he saw and said to Stomp: "The cyclist and his son were on their bicycles and about to cross the road.

"The father crossed the road and saw a car coming by.

"He thought that by signalling, the car would stop but the van there probably blocked the driver's view and so the kid couldn't be seen.

"The car drove past and I heard the father saying the 'f' word and saw him pointing his middle finger."

The Stomper added: "I have three kids myself. If I were to cross a road with my son, I will always make sure I stand between oncoming traffic and my son to ensure he safely crosses the road first.

"This man is a reckless and irresponsible father. He's also being abusive towards the driver, which I don't think is very fair.

"If I were him on the bicycle, I will ensure that no cars are coming. Even if there are any vehicles, I will make sure I can be seen so that my son can cross the road safely.

"I don't know what mindset he's having. He thinks that by standing beside the car, it'll stop but the driver probably can't see his son due to the van.

"He thinks he can control everything with his hand and this isn't the right way!

"Imagine what would've happened if his child had dashed through.

"He's irresponsible and he still has the cheek to think he's in the right, using vulgarities and pointing his middle finger at the driver.

"It's as good as jaywalking. He's trying to put the blame on others, causing danger to his own child and still trying to be abusive.

"Everything happened so fast that I didn't manage to capture what happened on my phone.

"I then realised my car was parked there so I went to check my in-car camera and found this footage.

"I didn't confront the cyclist and I didn't see the car driver confront him either. Maybe the driver didn't know she was being scolded."

Related Stories
Man stops car in middle of the road to 'block' driver, scolds him and flashes middle finger
Diners scolded by Bedok drink stall assistant for not ordering from him, NEA looking into alleged touting
PMD rider honks at pedestrian and scolds him for not giving way: 'We must share the path'
More About:
rude
dangerous
River Valley