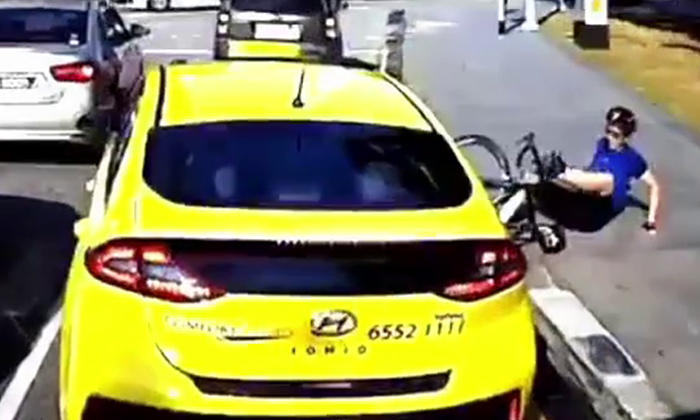 A cyclist took a tumble onto the pavement after his bicycle's front wheel got caught in a metal grating, but blamed his fall on a taxi driver instead.

Facebook page ROADS.sg posted a video of the incident that occurred along St Andrew's Road on March 18, at around 5.16pm.

In the video, the cyclist can be seen riding over drain gratings that are by the roadside.

He is then seen jerking suddenly, after apparently getting his front wheel caught in a grating.

This throws the cyclist off balance, causing him to fall off his bicycle and onto the pavement.

He then gets up and confronts a taxi driver next to him while making various hand gestures.

According to ROADS.sg, the cyclist "blamed the taxi driver for squeezing him to the kerb".

The cabby can be seen gesturing back.

A neighbouring driver who witnessed the incident is also seen winding down his window to "exchange a few words" with the rider.

The cyclist eventually rides off.

Related Stories
Woman falls off bicycle after bus gets too close to her along Choa Chu Kang Road
Lorry driver in viral Pasir Ris dispute with cyclist recounts incident: 'I swerved left to avoid taxi'
Volkswagon driver has the cheek to rage after 'inserting himself' in front of car
More About:
cyclist
fall
dispute
road rage
cabby
taxi