Cyclist dashes across oncoming cars without warning -- then gestures at driver 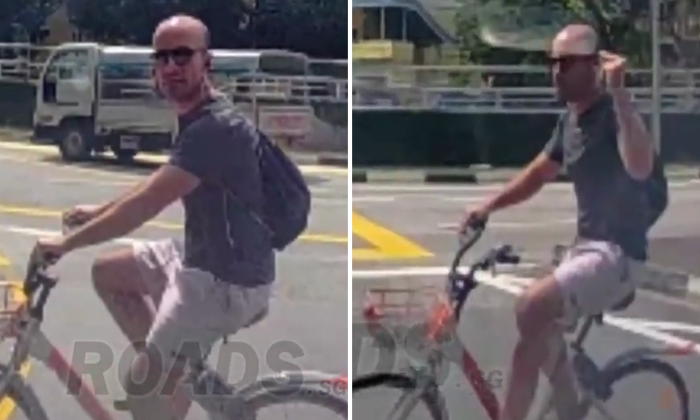 A cyclist behaved recklessly on the road when riding across oncoming traffic, but still had the cheek to make gestures at a driver.

A video of the incident, which occurred along Margaret Drive towards Farrer Road on Feb 10, was uploaded online by ROADS.sg.

The video's caption said: "I was the third car which was turning from a minor road to a major road.

"Cyclist on pavement came out without any warning and dashed across two moving cars (mine and the car in front).

"Cyclist made a hand gesture even though there were no honking or anything from me.

"He then turned his head angrily, dismounted and continued to gesture at us (wife, baby and me) threateningly - this happened on the pavement and my camera is unable to capture the sides".

Comments from netizens are largely criticising the cyclist.

Many also pointed out that he failed to "dismount and push" when crossing the road.

Related Stories
Cyclist nearly hit by taxi after riding across road when traffic light not in her favour
Driver fails to stop at Jurong West zebra crossing and hits cyclist, police investigating
Female cyclist flashes middle finger at driver who honked at her for riding in middle of road
More About:
cyclist
rude
road rage
reckless