Cyclist beats red light at Yio Chu Kang junction: "He was putting himself and others at risk" 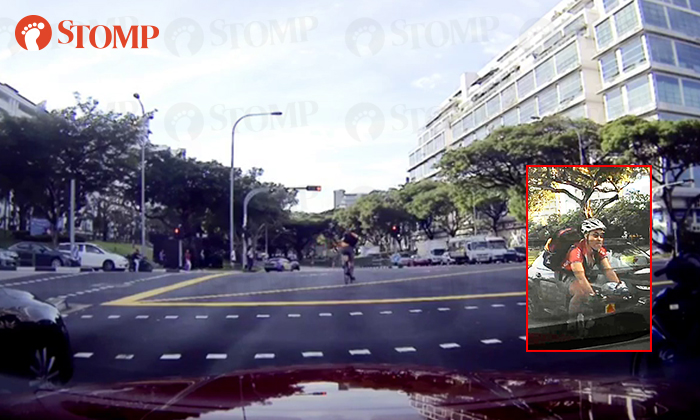 A cyclist was caught on camera beating a red light at the junction of Yio Chu Kang and Buangkok Road at about 8.30am on Monday (Dec 16).

Stomper Andrew was driving to his workplace in Paya Lebar when he stopped at the junction.

He then noticed a cyclist riding past the left side of his car and beating the red light.

Andrew contributed a video of the incident and a photo of the cyclist.

He told Stomp: "I saw the cyclist speed through the junction.

"Later, I drove down the road and caught up with him.

"I was travelling along the same route as the cyclist, so I managed to observe him for a while.

"I noticed that he continued to beat more red lights along the same road towards MacPherson."

Andrew added: "It's the first time I've seen a cyclist beating red lights and speeding through in a reckless manner.

"I thought that the way he rode was extremely dangerous. He was putting others and himself at risk.

"Nowadays, people have been talking about how personal mobility devices (PMD) are dangerous, but a fair share of cyclists are also being irresponsible on roads.

"It's not just PMD users. It boils down to all road users, where they all need to be responsible and ensure the safety of everyone."

Related Stories
Hey girl, no bus is worth risking your life to catch!
Youths climb onto roof of multi-storey carpark at Bedok North to smoke
Cyclist flashes middle finger when car doesn't stop for son who was riding across road at River Valley
More About:
cyclist
Yio Chu Kang
reckless
inconsiderate
dangerous