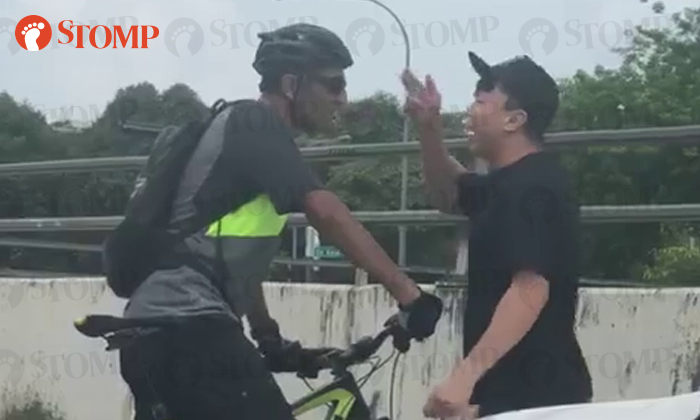 A cyclist and a car driver were caught on camera having a heated argument along the Anak Bukit Flyover in Bukit Timah on Sunday afternoon (June 17).

Stomper J said he witnessed the incident at 12pm and submitted a video that he filmed.

It is unclear what exactly the dispute was about, but the driver can be heard shouting at the cyclist: "You block my way for what?"

This led to an angry exchange of words, during which the driver repeatedly hurled vulgarities at the cyclist.

He also yelled: "You think what? Your father's country ah?" and "You pay road tax ah?" while the cyclist can be heard replying: "F*** you".

J told Stomp: "Some people celebrate Father's Day like this!

"While waiting at a traffic signal, this happened with each party blaming the other.

"These outbursts of anger and bad behaviour should be avoided for one to have a good day!

"Drivers should practice a peace of mind because anger can lead to accidents."

Related Stories
Woman blocks driver's way at Caltex Tampines while on the phone -- then scolds him for honking
Cyclist dashes across oncoming cars without warning -- then gestures at driver
Cyclist spits on driver's windscreen during road dispute in River Valley
More About:
dispute
cyclist
argument
road rage