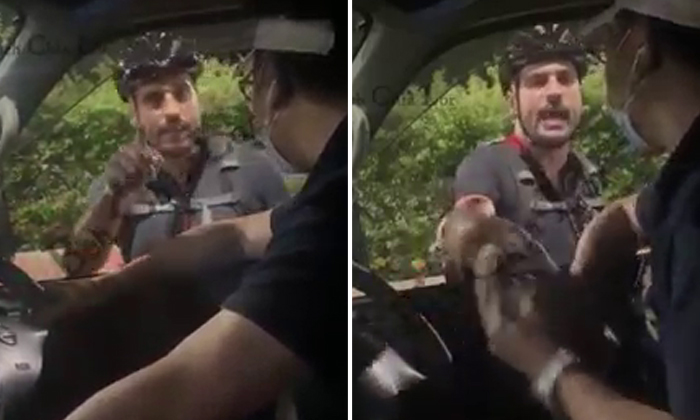 A cyclist and a driver were caught on camera in a road rage dispute along Bukit Timah Road.

A video of the incident was posted by Facebook page Beh Chia Lor - Singapore Road on Wednesday (Dec 29). However, the incident is said to have occurred in July 2020.

A caption accompanying the video said: "Japanese driver honked at the Caucasian, as he was slightly in the middle of the road. The Caucasian flicked his middle finger which triggered the Japanese driver to harass the bicycle rider."

In the video, the cyclist can be seen riding on the leftmost lane when the driver goes past him.

Both parties are subsequently seen stopping by the roadside and getting into a vulgarity-laden argument.

Cyclist: And I did. I'm glad that you (referring to lorry passenger) are taking that the videos because the video is only going to show the police you going all over the road.

Cyclist: Get out of here, you f***ing asshole.

As both continue to quarrel, the cyclist can be heard saying "go f*** yourself" and shouting at the lorry driver for "putting my life at risk".

The argument escalates with both men shouting loudly and hurling vulgarities at each other.

The driver is then seen holding up a water bottle, which the cyclist reaches for and tries to grab. The driver splashes water at the cyclist in retaliation while shouting, "Don't touch me!"

He also opens another bottle of liquid and splashes it at the cyclist, who responds, "You got big balls. Go ahead, empty it all out" and "I didn't f***ing touch you, I'm touching your f***ng van."

The cyclist adds, "You put my whole life at risk" and "get the f*** out of here" before walking away from the vehicle.

However, both men can be heard continuing to taunt each other.