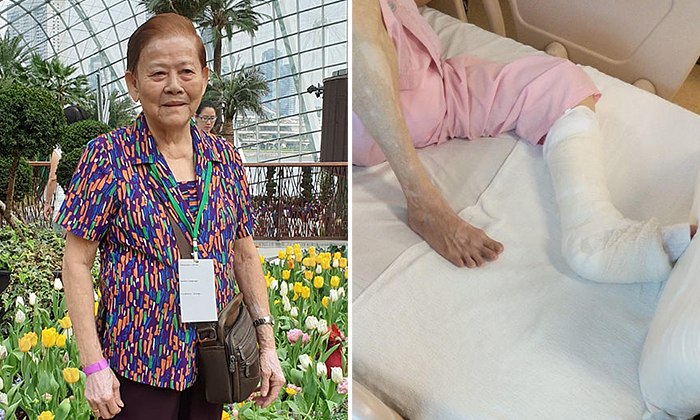 An 81-year-old cyclist sustained fractures on her left leg after a hit-and-run accident involving a motorcycle along New Upper Changi Road on Saturday morning (Nov 23).

Cyclist Lin Ya Ai was riding her bicycle to a market at Bedok Central when the accident happened.

Lin's grandson Xue Ding Bao told Lianhe Wanbao: "According to my grandma, the pedestrian light had turned green when she arrived at the junction.

"While she was about to cross the road, a motorcycle that probably beat the red light, collided into her.

"My grandma fell from her bicycle and onto the road."

Lin's bicycle hit another cyclist who also fell and got hurt. She told her family that the motorcyclist had stopped to take a look but she was unable to see how he looked like.

The motorcyclist then left the scene hurriedly.

Xue said that his grandmother sustained injuries to both of her legs including fractures to her left leg.

The family is currently looking for witnesses to provide information about the accident.

Xue said: "We tried talking to the shops nearby but no one saw anything.

"There are many banks near the scene of the accident and there's also a camera installed by the Land Transport Authority.

"We hope some of these cameras have footage of what happened."

"One of the cyclists, an 81-year-old woman, was conscious when conveyed to Changi General Hospital.