Cyclist, 70, injured after getting knocked down by hit-and-run driver at Bukit Panjang zebra crossing 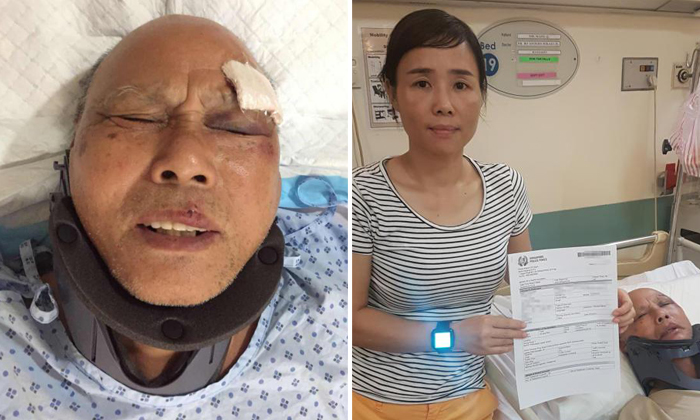 A 70-year-old cyclist suffered multiple injuries after getting knocked down by a car at a zebra crossing opposite Bukit Panjang Plaza on Thursday night (May 24), at around 10pm.

The accident left Mr Wang with a swollen eye and fractures in both hands. He also injured his head and has a blood clot at the back of his brain, reported Shin Min Daily News.

The victim's daughter, Ms Wang Caixia, said her father cycled every night as part of his fitness regime and had been on his way home when the accident happened.

Said the 40-year-old accountant: "My father was going past the zebra crossing when a car made a right turn. The driver did not give way and hit the rear tyre of my father's bicycle, causing him to fall onto the ground.

"Not only did the driver not stop his car to help, he even fled the scene!"

Fortunately, passers-by called the ambulance and Mr Wang was taken to the hospital.

"We rushed to the scene once we were informed of the accident and saw my father bleeding from the head. He was groaning and the sight of him broke my heart," added Ms Wang.

When Shin Min reporters visited Mr Wang in hospital, he appeared to be in a weak state.

He was unable to open his swollen left eye and both his hands were bruised. He was also feeble when he spoke.

"My father is advanced in age and the blood clot in his head could be both serious or minor. He currently has to be kept under observation in the hospital before it can be determined whether surgery is required," said Ms Wang, who has made a police report.

She added: "The driver is too much, fleeing after knocking down an elderly man."

Ms Wang also hopes that eyewitnesses can come forward so that she can find out more about what happened.

In response to media queries, the police confirm that a report was lodged and investigations are ongoing.