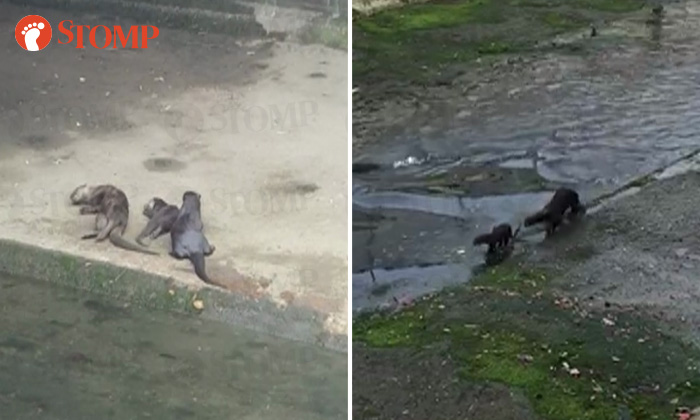 Stomper Nusaiba Happy saw the otters at 6.30pm and said that there were already about seven people near the canal watching them as well.

In videos shared by Nusaiba Happy, three otters are seen wriggling on the ground while one otter was just resting in the water.

She said: "They were huge!

"They were very cute, just swimming and playing around."

Stomper Steve spotted the otters at about 7.15pm in a canal along Siglap Park Connector, which was also near Kembangan MRT station.

In a video Steve shared, the otters are seen running along the edge of the water before diving into it to have a swim.

He said: "I saw a family of otters swimming.

"It was really interesting since I rarely see it.

"It was pretty nice so I wanted to share it."

Related Stories
Otters have wrestling match at Punggol Waterway Park
How cute can they get? Otters have family outing in Bendemeer Court
Cute otter leaves water to search for food at Pasir Ris Park
More About:
otters
animals
cute