Customer unable to get refund from Foodpanda for spilled drinks 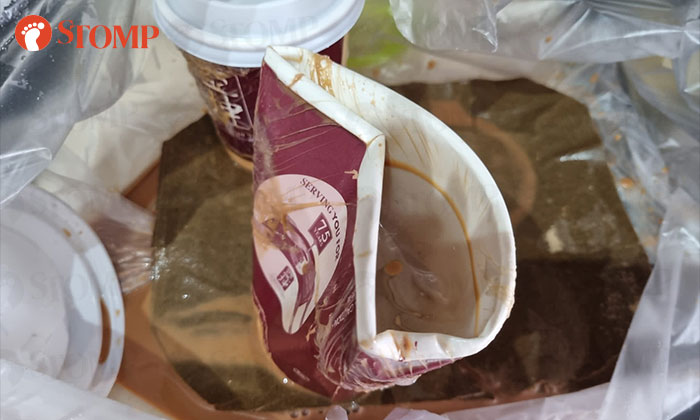 A customer was disappointed when he failed to receive a refund after drinks he had ordered via Foodpanda arrived all spilled.

The Stomper told Stomp he had ordered drinks and food from Ya Kun Kaya Toast at Raffles City.

As his entire family was down with Covid-19, no one was able to go out to get the food once it arrived at his home.

"The rider delivered spilled food at my doorstep and I was shocked that it came spilled so badly that I called up the rider," he said.

"It was rude of the rider.

"Nonetheless, I opened up the plastic bag and it had indeed spilled all over.

"I then filed a complaint to Foodpanda for a refund."

However, the Stomper said that he was told by Foodpanda that they had done a thorough check and no refund would be provided.

This shocked the Stomper who shared a screenshot from Foodpanda's website indicating that spilled drinks qualify for a refund.

Despite pointing this out, he was told once again that he would not be issued any refund.

"In short, this kind of service will cause a lot of distress during Covid-19, a time when an entire family is down and unable to go out," he said.

"This may encourage families affected by Covid-19 to go out and get food to avoid such lousy service."

Related Stories
Man waits 2 hours for GrabFood order to arrive only for it to get cancelled
Customer has frustrating convo with Foodpanda agent after getting wrong Domino's pizza order
$500 GrabFood order from Shake Shack thrown away at Jewel? Netizens have questions and theories
More About:
food
spillage
food delivery
foodpanda
bad service