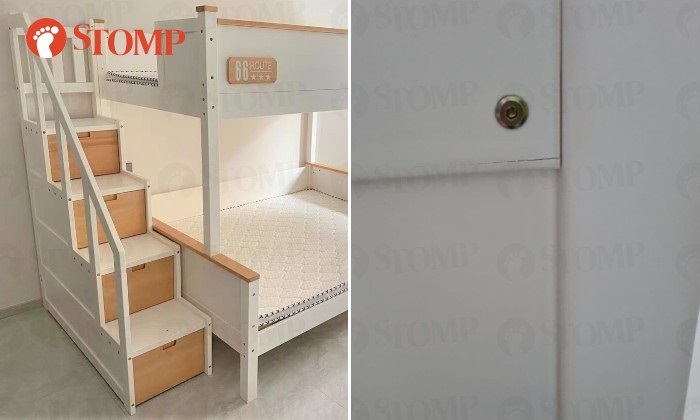 It was just a crack.

But it took more than 11 weeks to get it fixed.

Well, it was a deep crack.

In the time between Stomper Linda discovering the defect in the bed frame she bought from online furniture shop Miyamiko and the company sending someone to repair it, four public holidays had gone by.

The Stomper had ordered two bunk beds with pull-out drawers and a staircase for a total of $3,170 from Miyamiko.

The beds were installed on April 25. Two days later, she noticed a crack on the side of the staircase of one of the bed frames and sent a photo of it to Miyamiko via WhatsApp.

Four days later on May 1, Miyamiko replied that it would check with the factory after the holidays. May 2 was a holiday because Labour Day fell on a Sunday. May 3 was Hari Raya Puasa.

When Linda didn't hear from Miyamiko after the holidays. she messaged the company several times and after another public holiday (Vesak Day on May 15), she finally received a reply on May 20: "Hi, just a bit peeled off, we will send you some paint to repair."

Linda messaged back with another photo of the defect: "It’s not peeled off. As you can see, it is a deep crack." 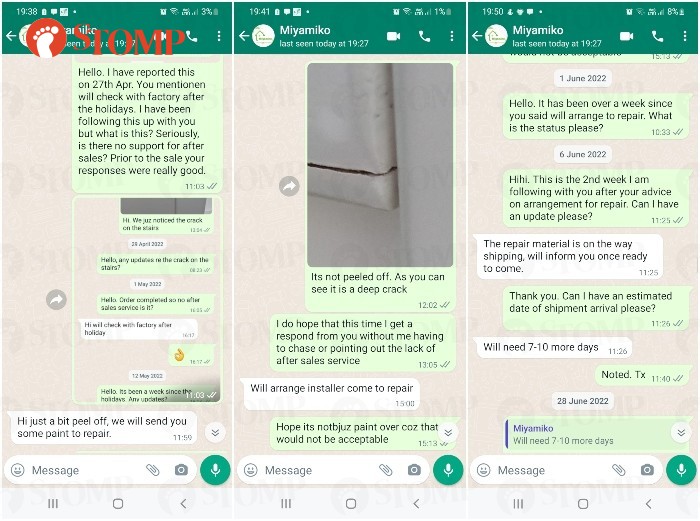 Linda messaged back: "Hope it’s not just paint over because that would not be acceptable."

Miyamiko did not respond to the message.

She did not hear from Miyamiko again until June 10 when the company told her the “repair material” will take seven to 10 days to arrive.

After more than 10 days, Miyamiko finally messaged her on July 4: "Will arrange this week."

Linda replied: "Please provide date and time. Also would like you to tell me what kind of repair you would be doing."

The Stomper pointed out that Sunday (July 10) was Hari Raya Haji and asked Miyamiko to reschedule.

On July 16, the company asked if the next day would be agreeable. She said okay.

The crack would finally be repaired.

Linda told Stomp: "When the men got here, we asked what kind of repair they would be doing and we were told 'paint'.

"Patience had all run out by now. The men couldn't speak English. So I asked them to call their boss so I can speak with him/her, but the boss just continued to WhatsApp instead.

"The men left when I said I didn't want painting and I was furiously typing WhatsApp messages with the boss.

"I asked why the boss never pick my calls. The message came that it was Sunday, so they could not pick up calls. Then why send the workers on this day?

"Then they said the company policy is to communicate via WhatsApp only.

"Then they asked why I was so rude to the workers? Excuse me? Demanding to speak with the boss is rude?

"Then they asked me who said painting? It was your workers! So then I took a screengrab of the WhatsApp message where the seller said 'paint' too!

"So then they said that I had to accept whatever kind of repair they do because it was up to the seller. So if the men leave now, the next time I would have to pay.

"The seller then explained that the workers were to apply wood glue and then paint over it.

"The men came back, glued and painted all in less than five minutes. For a five-minute job, it took more than two months to wait for the repair material (glue and paint) to be shipped!"

Sharing with Stomp screenshots of her WhatsApp messages with Miyamiko, Linda said: "See if you will get angst too."

Read the WhatsApp messages in the gallery.

Related Stories
Customer taunted by seller who sent wrong durian and told her to 'compromise'
Stomper loses $90 worth of bedsheets after only getting one of two Shopee parcels
Shopee seller suspended after sending customer cardboard instead of ladder, says he was on MC
More About:
customer service
furniture
online shopping
repair
crack