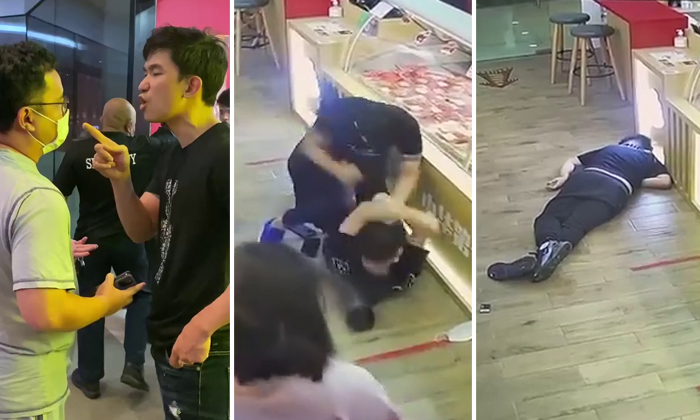 Two men were arrested following a violent dispute that broke out at City Gate in Beach Road in the early hours of Tuesday (Feb 22).

The 27-year-old man was conscious when taken to hospital.

Both men were subsequently arrested for affray.

Several readers alerted Stomp to videos of the fight that have been circulating on social media, with one Facebook post garnering over 3,600 shares.

The first video shows the two men in an altercation in a braised food store. The older man can be seen throwing a stool at the other party and punching him.

Both men then exchange blows, but the younger guy falls to the ground and has punches rained on him.

The younger man can be seen trying to get away from his assailant, who continues to kick and taunt him repeatedly.

The younger man is subsequently kicked to the ground again and appears knocked out. Blood is seen on his face as he recovers himself, gets up from the floor and stumbles around.

Another video shows the older man in a dispute with the bespectacled shop owner. He can be heard hurling insults and vulgarities at the latter throughout.

According to Shin Min Daily News, the younger man had shopped and paid for food at the store. He turned back to look at a display cabinet just as he was about to leave.

However, he was stopped by the older man.

The 40-year-old shop owner, Mr Zhu Huayi, told Shin Min: "The older man asked the other party why he was staring at him. The latter denied doing so and said he just wanted to buy more food, but the older man refused to accept this."

Mr Zhu said he called the police immediately. He also asked the older man why he had hit the younger man and was told that the other party "deserved to be beaten".

Ms Ge, a 35-year-old partner of the store, said the older man did not buy anything and had dished out the first blow.