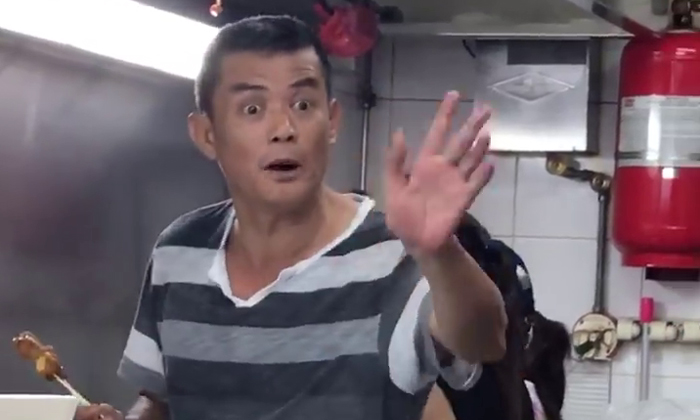 A customer got into an argument with an employee from a satay stall at Ci Yuan Hawker Centre in Hougang, after waiting 45 minutes for an order that turned out to be 'non-existent'.

Facebook user Andre Lim shared his experience at Leo Satay in a post on June 10, and also posted a video of the dispute.

When contacted by Stomp, Andre said his family were dining at the hawker centre and had ordered many dishes, including 25 sticks of satay, to share.

He explained: "My brother's girlfriend was the one who made the order and after not having them return to the table even after 20 minutes or more, it started to get weird. Therefore, I made my way to the stall and saw that they were still waiting."

According to Andre, this was despite the family being told by staff that the estimated waiting time was ;10 to 15 minutes.

However, even after finishing the rest of their food, the buzzer that Leo Satay had given Andre's family had yet to ring.

The group continued waiting for another 15 minutes, but to no avail.

Andre told Stomp: "My brother's girlfriend asked the hawker politely about the status of our order but was told to wait.

"After waiting for 10 more minutes, we realised that something was wrong."

By then, 45 minutes had already passed since the order was first made.

During this time, "a few customers came by and the cashier continued taking orders", but Andre said his family waited till the queue was clear before checking with the cashier again.

Andre added: "We asked them further about our order, but they said there was no order receipt on their end for the buzzer number we had, which meant that they lost our order."

He also said that the stall "continued what they were doing, taking new orders from incoming customers" after that.

The group's requests for either a refund or for the stall to immediately process their order were apparently both rejected. 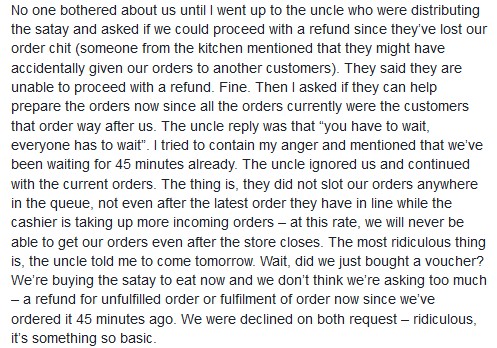 Andre told Stomp: "A man at the stall replied very rudely and nastily to my brother's girlfriend, saying they couldn't do anything that we had requested.

"He even told us to return tomorrow.

"I was standing at the back and seeing how appalling the man was treating a girl in such an incident, I confronted him, asking how he could treat a customer like this and worst, a girl, in such a manner."

The two men can be heard having a heated exchange of words in the video posted by Andre.

"All the other staff continued with their work, acting like nothing has happened," said Andre.

"The man continued to say that he had many other orders in line, could not do ours, and had nothing to compensate us. It did not make any sense.

"Other customers were also affected like us. In the video, you can see the lady standing up for us. She was also an affected victim."

He wrote: "Conclusion is that both the lady and us did not get any satays nor refund.

"We were very disappointed at how the situation was being handled and how inflexible people can be. It’s not easy to deal with large number of orders and understand that such situations do happen.

"However, immediate actions should be taken for any wrong orders and the first step should be admitting your mistakes. Shouting at customers and pretending that the order never happened is something unacceptable."

Related Stories
Man waits over 2 hours for Deliveroo to send him his Sakae Sushi dinner -- that never came
Grab passenger gets charged cancellation fee after driver increases waiting time from 3 to 20 min
Dessert shop responds to Stomp over online dispute with customer on Facebook
Woman eagerly orders mooncakes online for the weekend -- but they never arrive
More About:
bad service
argument
dispute