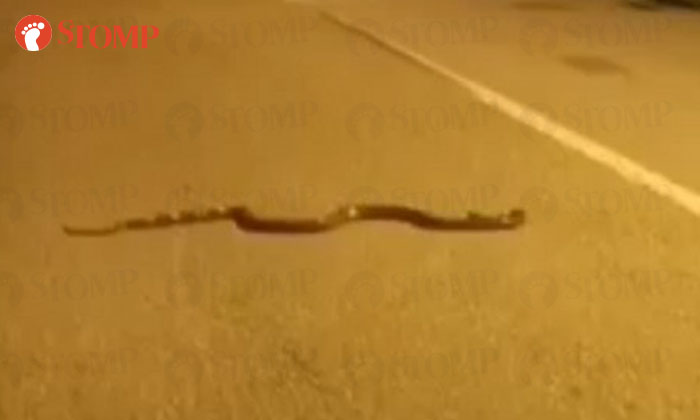 Stomper Min spotted a python slithering along a road in Pasir Ris Farmway while he was having a stroll in the area last week.

He said: "I stumbled across the huge snake, which was in the middle of the road.

"I was shocked because it was so big."

Min took a video of the incident and sent it to Stomp.

In the video, a long snake can be seen slithering along the road.

In the background, the Stomper can be heard exclaiming: "Holy sh*t! It's a python."

"Out of curiosity, I grabbed the python by its tail.

"In the end, the snake ended up going into the drain," added Min.

However, going near and touching a snake is exactly what NOT to do if you happen to encounter one.

Members of the public are instead advised to contact the Agri-Food and Veterinary Authority of Singapore (AVA) at 1800 476 1600 or the Animal Concerns Research and Education Society (Acres) at 9783 7782 should they see a snake in distress or requiring relocation.