Crowds in Chinatown despite new measures as it's an 'annual must-do', 'best place to feel festive' 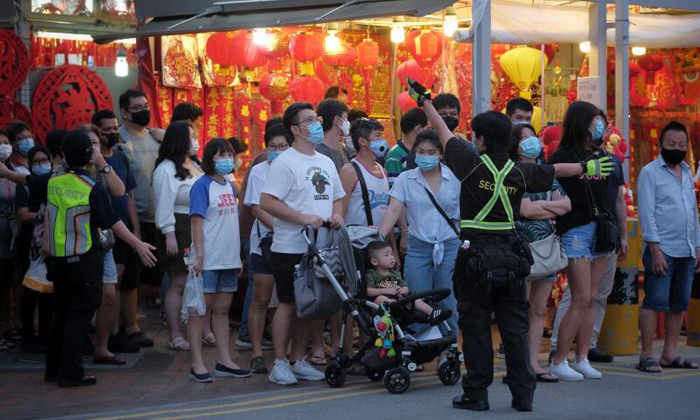 A lot can change in a week, such as the introduction of the above measures to reduce crowding in Chinatown's shopping precinct after The New Paper reported on shoppers "rubbing shoulders" in packed streets and shops two Saturdays ago.

What has not changed so much is the crowding in Trengganu Street, Temple Street and Pagoda Street in the wake of the new measures.

Though the Singapore Tourism Board (STB) estimated a 20 per cent drop in the crowds compared to the previous Saturday, many people were still too close for comfort in safe distancing terms.

In fact, some of them told The New Paper that they had gone to Chinatown because they expected the new measures to reduce the crowding.

Housewife Tan Mei Sin, 42, who was there with her husband and their three young children, said they wanted to take in the Chinese New Year atmosphere.

"It's an annual must-do for our family and Chinatown is the best place to come and feel festive.

"Things are already so gloomy. We can't even go to Johor Baru to shop for new year goodies. We decided we would spend about an hour here, have dinner and then leave."

Madam Tan was not alone. Of the 24 people who spoke to TNP, 11 said they were in Chinatown primarily to soak in the atmosphere. Or as one put it, "just come to feel the vibes".

The new crowd control measure were announced by the Ministry of Sustainability and the Environment (MSE) last Friday to prevent the spread of Covid-19.

Apart from suspending the light-up over the weekend, they included closing the up-riding escalator at Chinatown MRT station exit A from time to time to manage passenger flow into Pagoda Street.

The MSE also urged the public to adapt their Chinese New Year celebrations to "protect vulnerable members in our community, such as the elderly" and be socially responsible to prevent a resurgence in community transmission.

The Chinatown Business Association (CBA) said on Saturday that barriers were put in place and additional security staff and safe distancing ambassadors would be deployed in crowded areas.

Mr Anthony Tan, 56, who was with his 76-year-old mother and their helper, said: "I promised my mother I would bring her here... like in past years."

The technician added: "But I made sure she wore her mask properly and sanitised her hands every time we moved from each stall. I find it hard to deprive her from enjoying the festivity."

Noting an estimated 20 per cent reduction in crowd size, Ms Serene Tan, STB's director for arts and cultural precincts, told TNP: "We thank the public for their understanding and seek their continued cooperation to visit Chinatown during off-peak hours."

The STB also said last week that 34 people have been fined $300 each in Chinatown since Jan 15 for not wearing face masks or gathering in groups of more than eight.

In the same period, 11 businesses in Chinatown were fined $1,000 to $2,000 for failing to ensure 1m safe distancing between customers and for allowing gatherings of more than eight people.

Most of the shopkeepers approached by TNP said they were fine with the stepped-up enforcement.

One of them, who wanted to be known only as Ms Jessica, 50, said: "I think that it is better this way because I am worried too.

"Our shop received a warning for not controlling the crowd... With the (new) restrictions, it is easier for us to control the situation now."

A security officer for CBA told TNP there is a contingency plan to close off the streets if the crowds became unmanageable.

When shown the new photographs of the crowds, infectious disease specialist Leong Hoe Nam said: "Singaporeans are absolutely becoming complacent... but we can also 'share the cheer' by doing something else. Go outside of Chinatown and tone down the celebration, have fun without the crowds."

Noting that the ability to impose restrictions has its limits, Dr Leong said: "Can the authorities police everything? I plead for common sense to prevail among the public.

"We all hate it when our parents nag us. And as parents, we hate nagging our kids too.

"I do hope the enlightened Singaporean will rise to the occasion instead of the 'kiasu'one."

Related Stories
Hundreds rub shoulders in Chinatown: It's so crowded that safe distancing is not possible
Police called in after large group seen having New Year's Eve party in Chinatown
No masks and SafeEntry, crowds mingling: Some still partying at Golden Mile like no Covid-19
More About:
crowd
Covid-19
Chinatown