Crowdfunding drive raised over $46,000 for Thai teen hit by a car 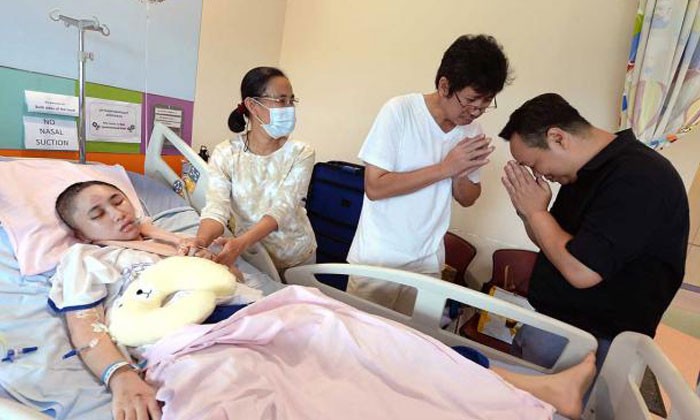 Tears flowed freely yesterday as the parents of Thai teenager Aroonrak Jattanathammajit, who was knocked down by a car more than two weeks ago, met the man who set up a crowdfunding drive to ease the burden of her medical bills.

In just three days, the campaign has raised about $46,000 to offset the 16-year-old's medical bills.

The family believed they have chalked up about $60,000 so far and the amount is expected to increase.

Donations and well-wishes have been pouring in from people from all walks of life for the San Yu Adventist School student who was hit by a car when she was crossing Balestier Road on the morning of Sept 18.

She had been on her way to school at Thomson Road to help out at a community outreach programme involving old folks.

The bulk of the donations came from the campaign set up by Mr Dennis Yeo, 44, on crowdfunding website GIVEAsia.

When the teen's father, Mr Sarayuth Jattanathammajit, 49, and his wife met Mr Yeo yesterday afternoon at KK Women's and Children's Hospital, they thanked him profusely.

Mr Yeo, who works in a non-profit organisation, said his heart broke when he read The New Paper report on the family's plight.

"The breaking point was when I read that she was on the way to help some old folks when she was hit by a car. Reading about her plight, I can't not help her and her family in this tragic situation," he said.

TNP was in attendance when another big-hearted Singaporean, who wanted to be known only as Mr Sam, visited the family on Tuesday evening. He passed a cash donation of what TNP understands to be "a few thousand dollars" to Mr Jattanathammajit.

Mr Sam said: "I sent my daughter overseas to study when she was about 16 or 17, and it's a parent's worst nightmare when something happens to their children while overseas, so I can empathise."

Mr Jattanathammajit was initially reluctant to accept the cash, but eventually did at Mr Sam's insistence.

Mr Sam said: "Most of us are fortunate and I just want to do this little part to help this family in their time of need."

Speaking to TNP at the hospital, Mr Jattanathammajit tearfully expressed his gratitude to Singapore donors, the Thai Embassy in Singapore and the local Thai community, which also rallied together to support the family of three.

He said through an interpreter: "We've hardly slept since the accident, but we're truly appreciative of everyone who has come forward to help us."

Mr Jattanathammajit, who runs a small rubber business in Thailand, is also racked with guilt about sending his only child to Singapore by herself.

The family went into debt of $80,000 to fund Aroonrak's studies here. He had hoped for a better future for her and had sent her to Singapore last year so she would get the "best education possible".

Since the accident, Aroonrak has undergone two brain operations.

Although she is out of a coma and is responsive, she has not opened her eyes and is unable to speak. Her condition has stabilised, but a timeline for her recovery has not been set.

Her father said: "Doctors didn't commit to anything, they just said some people in her condition recover and some don't.

"We're hoping to take her back to Thailand, but we don't know when."

Aroonrak's parents flew into Singapore immediately on the day of the accident and have kept vigil at her hospital bedside ever since.

Since TNP first broke the story on Sunday about Aroonrak's accident, the Thai Association Singapore has raised more than $3,000.

Committee members from the association, like Ms Kansinee Boonlong, have also been visiting the family every day in hospital.

Ms Boonlong said the association is looking for volunteers who can speak English and Thai to accompany the family in hospital and help to translate instructions and updates from the medical team.

The couple speak only Thai and do not understand English.

Ms Boonlong added that the association is also looking for answers about the Sept 18 accident.

TNP understands that the driver of the car stopped to help Aroonrak and also called the ambulance.

TNP also understands that no arrests have been made.

A police spokesman said yesterday that investigations are still ongoing.

The public can donate here.

She has been so worried for her best friend that 16-year-old Kotchamon Techathanakitlert said she has been unable to focus on her exams.

For more than two weeks, fellow Thai student Aroonrak Jattanathammajit has been lying in KK Children's and Women's Hospital and Kotchamon frets about her every day.

"I pray for a miracle every day," said Kotchamon, who also attends San Yu Adventist School.

The best friends, who were roommates for a year at the Balestier Students' Hostel, would do everything together.

Kotchamon said Aroonrak had been excited to attend the community outreach activities in school where they were supposed to interact and perform for the elderly folk.

The morning of Sept 18, Kotchamon had left the hostel shortly after her friend and was shocked to find Aroonrak's belongings strewn across the road.

By that time, her friend was already on the way to the hospital.

"Every day, I think about her and pray for a miracle that she would get well," said Kotchamon.

"Whenever I see her things in the hostel room, I miss her badly.

"Although she hasn't opened her eyes, I still talk to her when I visit her in hospital because I know she can hear me. Sometimes, her eyes move and her fingers twitch, as if she's responding."

Students and staff of San Yu, where Aroonrak is known as a bright and diligent pupil, as well as members of the Seventh-day Adventist Church, which runs the school, have been visiting her regularly and offering her parents suppor.

"Since the accident, we've been working together with many parties - the police, the hospital, the Thai Embassy and the church - to see how we can support the family."