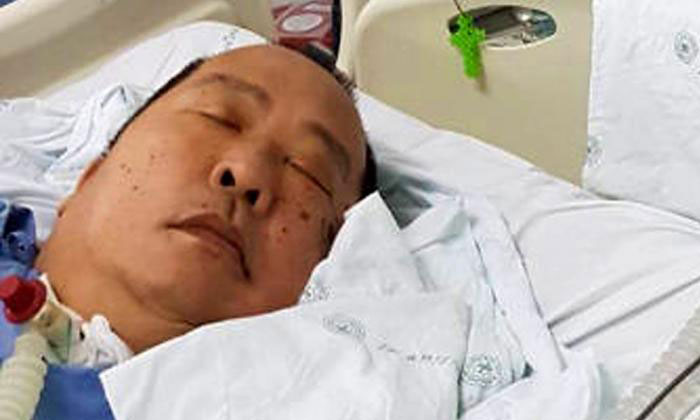 A crowdfunding campaign for a stricken Singaporean humanitarian worker in Chiang Mai, Thailand, has surpassed its target of $100,000 since it started on June 27.

Mr Calvin Huang, 59, collapsed in Chiang Mai on April 12 after suffering a stroke, and was subsequently taken to Sriphat Medical Centre for emergency surgery.

He has been warded in the Intensive Care Unit since, and his family hopes to bring him home by the end of next week.

His sister, Ms Yvonne Huang, 60, who started the Give.asia campaign, said she was overwhelmed with gratitude.

The self-funded missionary told The New Paper on Friday: "There are so many people who don't know him, but have penned messages for him and I've read them to him.

"It's heartwarming to see the donations coming in, big and small."

It was previously reported that Mr Huang, a former air steward has been doing humanitarian work in Thailand since 2005. He helped out with the post-tsunami disaster relief efforts in Phuket with the Singapore Red Cross.

He later based himself in Chiang Mai, where he worked with Burmese refugees and various hill tribes.

To cover his personal expenses, Mr Huang ran a tour operator service, but he mainly involved himself in humanitarian work.

He facilitated multiple efforts to bring overseas teams into Chiang Mai to provide medical care for the hill tribes, and he also brought in fleece blankets for the needy in preparation for winter.

The campaign got a significant boost at about 3pm last Friday, when a $20,000 donation was made by a retiree who only wanted to be known as Mr NT.

He told TNP: "I attend the same church as Calvin's mother, and although I don't know Calvin personally, I am touched by his efforts in helping the poor."

Alumni from Catholic High School, Mr Huang's alma mater, also collected about $51,000 separately to be donated to his family.

Mr David Kong, 59, who led the fund-raising effort, said: "I don't know Calvin personally, but he was in the same batch as us in the class of 1974. It's been more than 40 years since we left the school, but we still consider him one of us."