Crowd of over 1,000 form snaking queues at Lucky Plaza to remit money 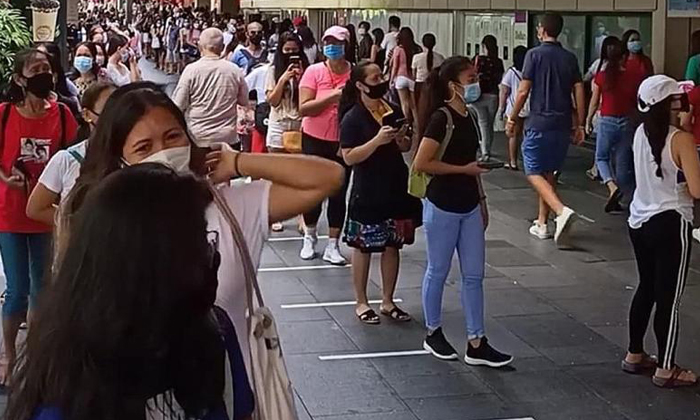 To send money to her family in the Philippines, Ms Em Jei Valdez, a foreign domestic worker (FDW) here for 13 years, had been using Singtel Dash since 2018.

But the 40-year-old recently changed her mobile number which meant she could not use the e-remittance service until the system was updated.

That was why she went to Lucky Plaza last Sunday to send money home. And she found a large crowd of FDWs there.

Shin Min Daily News estimated that more than 1,000 FDWs were at the mall that day to remit money.

Photos of snaking queues outside the mall on social media led some netizens to raise concerns about safe distancing rules being breached.

Enforcement action like fines or prosecution would have been taken against those who failed to comply, she added.

In light of the pandemic, the Ministry of Manpower (MOM) issued an advisory that FDWs should stay at home, including on their rest days.

If they do need to run essential errands or buy food, they should seek the employer's consent to go out and return home immediately thereafter.

Ms Valdes was anxious to send money home as she had become the sole breadwinner for her 62-year-old mother and two boys, aged 20 and 16, after the catering company her elder son worked for closed due to the lockdown in the Philippines.

She was taken aback when she arrived at Lucky Plaza at 11am.

"I was thinking, 'My God, it's really crowded'. There were three queues to go in. If it was just one line, it would have stretched all the way to Scotts Road," she told The New Paper.

With a limit to the number of people allowed into the mall and shops, queues formed outside Lucky Plaza and inside.

A remittance agent there said long queues also formed outside the outlets in the mall.

Ms Valdez decided to buy lunch and go home. She returned around 4pm when "there weren't so many people" to remit the money.

She explained that many FDWs are paid at the end of the month and use their rest day on Sunday to send money home.

Also, some of her friends had not joined e-remittance services because they were not given Wi-Fi access at home and did not want to risk going over their mobile data limits.

Home-grown payments platform TranSwap launched its e-remittance service for FDWs and their employers on May 6.

But its chief executive officer and co-founder Benjamin Wong admitted the adoption rate from FDWs had been low.

In an advisory sent to employers last Tuesday, MOM encouraged them to introduce their FDWs to e-remittance.

Mr Yeo Guat Kwang, chairman of the Centre for Domestic Employees (CDE), cited the use of the POSB Jolly mobile application, which allows FDWs to transfer funds to their families electronically.

FDWs can set up a CDE-POSB payroll account, for which first-time customers would not have to pay a minimum deposit.

He said: "During Phase One ... we should not let our guard down. Everyone should avoid crowded places as much as possible so that we do not risk Covid-19 resurfacing within the community."

Related Stories
Another group of people allegedly gather to gamble, this time at Marine Parade carpark
'Sibeh hot and sibeh long queue' at Giant Hypermarket, but kudos to staff for giving out water
Grab centre at Sin Ming closed after crowd of drivers turn up to collect delivery bags
More About:
queue
crowd
Covid-19
Lucky Plaza