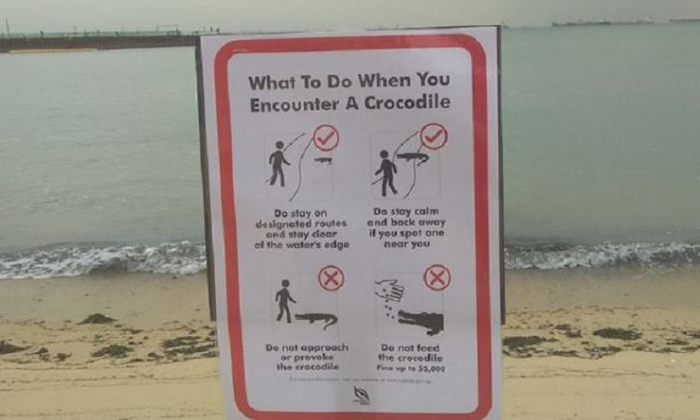 All water activities have been suspended after sightings of a crocodile were reported at a construction site at East Coast Park on Nov 6.

A spokesman for the National Sailing Centre (NSC) told The Straits Times on Tuesday (Nov 7) that contractors at a construction area next to the NSC saw a crocodile on Monday afternoon.

According to the NSC spokesman, the crocodile was spotted in the water at the construction site, where a canal was being built. Following that, NSC informed the National Parks Board (NParks) immediately and all water activities were ceased.

The spokesman added that "As the safety of the participants are our priority, on-water activities will be ceased until further notice."

About 120 sailors were affected when water activities were ceased that day.

Group Director of Parks at NParks Mr Chia Seng Jiang told Straits Times that they were alerted to sightings of a crocodile on Monday and Tuesday in the waters near NSC.

A joint-operation by NParks and the Agri-food and Veterinary Authority (AVA) is underway to capture the crocodile.

NParks advises East Coast Park visitors to keep to designated paths and away from water edges.

Those who encounter a crocodile should stay calm and back away slowly. They should not approach, provoke, or feed the animal.

Crocodiles sightings have been reported as recent as last month at Seletar Link and at Pasir Ris Park in August of this year.