Covid-19 circuit breaker to be extended by one month to June 1: PM Lee 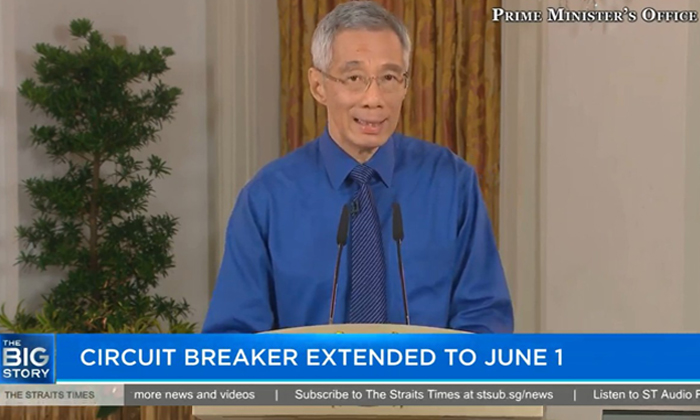 The circuit breaker to choke off the spread of the coronavirus will be extended by another month, and existing measures will be tightened until May 4, said Prime Minister Lee Hsien Loong in his fourth national address on the situation on Tuesday (April 21).

This means that more workplaces will be closed to further reduce the number of workers keeping essential services going. Some hot spots, such as popular wet markets, remain a problem, as large groups of people continue to congregate there, Mr Lee said.

While he noted that the circuit breaker measures have been working, he stressed that Singapore cannot be complacent. He said the number of unlinked cases has not come down, which suggests a "hidden reservoir" of cases in the community.

Singapore must therefore press on with its tight circuit breaker measures to decisively bring down numbers in the community, Mr Lee said.

"We also want to make sure that if any leakage occurs from the dorms to the wider community, we can detect and contain it early, and prevent new clusters from forming and bursting out of control."

He called on all Singaporeans to stay home as far as possible, and urged those who have to go out to do so alone and not as a group or with family.

"Remember: it is not just about adhering to the letter of the law," he said. "The spirit of the guidelines is to reduce movement to a minimum, and to avoid being out and about in the community. This is the way to protect yourself, your family and everyone else."

He acknowledged that many people, including business and workers who are hurting from the fallout of the crisis, will be disappointed by the extension of circuit breaker measures.

"But I hope you understand that this short-term pain is to stamp out the virus, protect the health and safety of our loved ones, and allow us to revive our economy."

PM Lee last addressed the nation on April 3 to announce the circuit breaker measures that kicked in four days later, forcing people to keep their distance from one another in an effort to limit the virus' spread.

Since then, the number of new cases reported in the wider community has inched downwards. But in foreign worker dormitories, cases have shot up over the past week as a result of crowded living conditions and active testing for the virus.

PM Lee said the Government will take more measures to care for workers that are being affected by the outbreak.

Mild cases will be housed either on site, in a separate facility within the dorm, or in community care facilities elsewhere. Those who need more active treatment will get immediate attention, and will be taken promptly to the hospital to help them recover.

The Government is also pre-emptively moving older workers, who are more vulnerable, to a separate dorm where they can be monitored more closely.

"To our migrant workers, let me emphasise again, we will care for you like we care for Singaporeans," he said.

He thanked them for their cooperation and assured them that their health, welfare and livelihood will be taken care of, including making sure they get paid, can send money home, and helping them stay in touch with friends and family.

Rounding up his speech, PM Lee said that to exit the circuit breaker, three things must be done.

First, Singapore must open up incrementally, making sure that the country is safe each step of the way. This is what New Zealand and Germany are beginning to do very cautiously, he said.

Singapore must also scale up testing substantially, to quickly detect any new cases that pop up.

"This we are progressively doing, not only by procuring test kits and equipment from other countries, but also by developing and manufacturing our own test kits."

The country must also make full use of IT so that contact tracing can take place much more efficiently.

"We have the TraceTogether app, and we are currently developing other apps for this purpose," Mr Lee said. "For these to work, we will need everyone's cooperation to install and use these apps, like what the South Koreans have done.

"There will be some privacy concerns, but we will have to weigh these against the benefits of being able to exit from the circuit breaker and stay open safely."

On Tuesday afternoon, the Health Ministry announced that 1,111 new cases were confirmed that day, with only 20 Singaporeans and permanent residents among them. This brings the national total to 9,125. More details will be made available on Tuesday night.