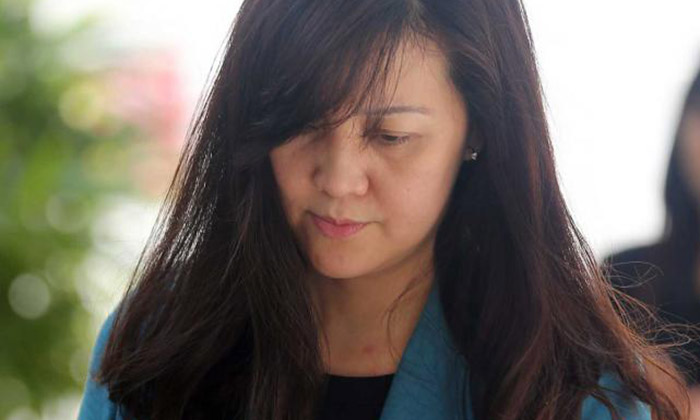 The next hearing where he will plead guilty is scheduled for July 27.

Yang Yin did, claiming this was why he first told police that the money had been entrusted to him to buy a painting for an elderly widow, before changing his story.

Asked by Deputy Public Prosecutor Nicholas Tan if this made sense, the police officer who questioned the 42-year-old former China tour guide - who is fighting charges that he misappropriated $1.1 million from the widow - told the court yesterday: "It did not."

On the fourth day of the trial, Deputy Superintendent of Police (DSP) Jane Lim took the stand and was asked about the differing accounts Yang gave about a $500,000 sum that was moved from the widow's bank account to his, then back to her account before landing in his father's account in China.

DSP Lim, a Commercial Affairs Department senior investigation officer, said Yang first told police the 89-year-old widow had given him $500,000 to buy a painting of a horse - which in earlier testimony was dismissed as a fake that would cost only $200. But he later claimed the money was a gift. When asked to clarify, DSP Lim said Yang replied: "I forgot that she gave me the money as a gift. That was why I did not state so earlier."

DSP Lim said she then asked him why he would use the money to buy a painting of unknown origin for the widow, Madam Chung Khin Chun. "My grandmother, Madam Chung, likes the painting," he replied.

The painting is one of the key pieces of evidence in the prosecution's case. DSP Lim yesterday also recounted how Yang came to purchase Horse Drinking Water, which Yang claims is by renowned Chinese artist Xu Beihong.

Yang told police he met the seller, a Mr Zhu, at a flea market in Hangzhou in 2010. He then took a photo of the painting and showed it to Madam Chung, whom he was living with then in her Gerald Crescent bungalow. He claimed she then asked him to buy it.

He told police that he bought the painting for $500,000 and brought it back to Singapore in 2010. Madam Chung then wanted him to frame the painting, so he brought it to China. He did nothing to it until September 2014, when Madam Chung's niece sued him.

As he was ordered to declare his assets, he needed take an inventory and asked a friend to take the painting from Hangzhou to Japan where he was on a business trip. The painting was later found in Yang's suitcase and seized by police during a raid at a Fernview flat on Sept 17, 2014. It had been folded repeatedly and stuffed in an envelope.

Mr Huang Yi Yao, who was Madam Chung's OCBC bank relationship manager from 2009 to 2010, yesterday told the court how the $500,000 finally ended in the bank account of Yang's father, Mr Yang Sannan, in China in February 2010. Mr Huang did not know who Mr Yang Sannan was at that time.

"The accused explained that the monies were for his mother in China and Madam Chung who sat in front of me confirmed that," said Mr Huang.

The roundabout transfer - from Yang to Madam Chung and then to China - had avoided "red flags" that would arise had Yang made the transfer directly as he was unemployed then, said Mr Huang.

Accountant Ong Sok Hun, who also took the stand yesterday, testified that the accused had sought her help to prepare accounts for his company Young Music and Dance Studio, based on receipts and other documents he provided to her.

Yang had in May pleaded guilty to 120 charges, including offences involving his permanent residency and falsification of receipts.

Meanwhile, Madam Chung, who was diagnosed with dementia in 2014, will not be taking the stand. Doctors appointed separately by the prosecution and defence had examined her last week and found that she was mentally unfit.