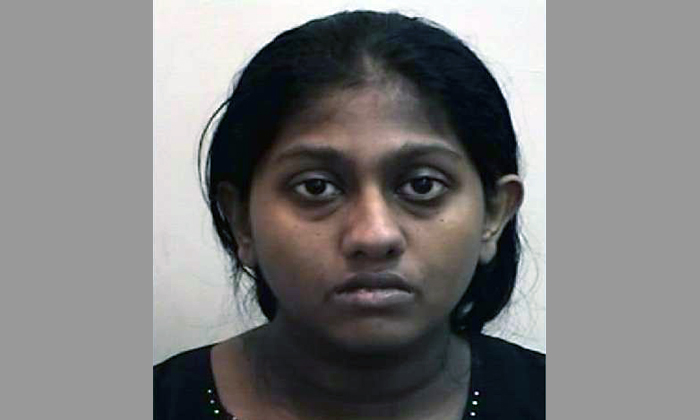 A housewife, whose husband had asked his maid to finish the food as he could not do so, placed a heated spoon on the maid's face for eating the leftover food.

On another occasion, Zinnerah Abdul Majeed used a heated spoon on the forearms of Ms May Thu Phyo, 23, for accidentally breaking a cup while washing utensils in the kitchen.

Zinnerah, a 28-year-old mother of three, was jailed for 20 months on Wednesday (Nov 2) after admitting to three charges - two of causing hurt with a heated substance and one of hitting her arms with a bicycle lock.

Six other maid abuse charges were taken into consideration in sentencing.

A district court heard that the victim started work for the family in Yishun Avenue 4 on July 28, 20l5.

Sometime in the last week of August that year, Zinnerah found out that the maid had accidentally broken a cup and punished her by placing a heated spoon on her forearms.

At around that time, she was angry with the victim for losing her trolley and damaging several of her things. Zinnerah grabbed a bicycle lock and hit the maid on her arms.

Further investigations showed that on Sept 1 the same year, Zinnerah's husband, Mr Mohammed Yazar Arafat Abbas Manthiri, was having his meal when he told the victim to have his food as he could not finish them. She obliged.

After finding this out, Zinnerah confronted the maid, who remained silent. She then heated the spoon on the stove and placed it on the left side of her face.

The maid ran away three days later. A member of the public found her in a state of distress at a void deck several blocks away and called the police.

The maid was found to have multiple injuries on her face, arms and shoulders. She also had multiple second-degree burn wounds on the left side of her face and hands which will likely leave permanent scars.

Police later brought the victim to a shelter home.

Seeking a sentence of nine to 13 months' jail per charge, the prosecution said these  were wanton acts of cruelty, noting that the burn wounds are likely to be permanent.

Zinnerah's lawyer V. Suriamurthi said his client, who has three young children, regrets what she has done and is remorseful. He said Zinnerah has paid $6,180 compensation to the maid for loss of earnings and medical expenses.

Zinnerah could have been jailed for up to 10½ years and fined on each charge.