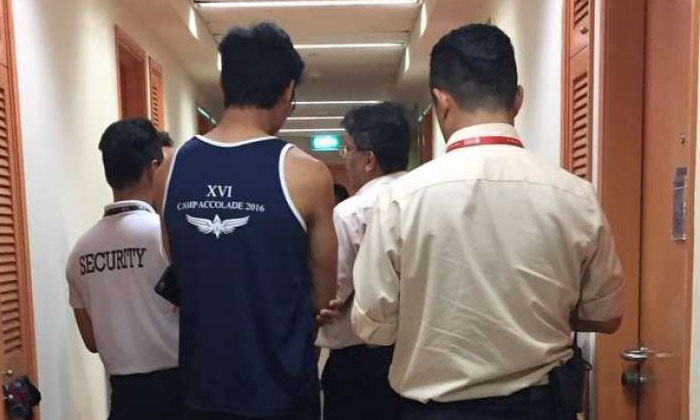 A Peeping Tom was caught filming a resident at a student dormitory at the Nanyang Technological University (NTU) on Thursday (Oct 13).

The fourth-year student from Hall of Residence 16 was nabbed by students after he was spotted filming a resident in the shower.

The resident saw a smartphone above the cubicle wall while he was bathing at 1am.

He rushed out to confront the suspected peeping tom, who locked himself into a cubicle, school newspaper The Nanyang Chronicle reported.

The resident, who did not want to be named, then called for help and a few hall residents caught hold of the suspect when he came out of the cubicle.

The students went through the alleged voyeur's smartphone, and found 66 videos of male students showering saved in his phone.

The suspect tried to delete the videos while hiding in the cubicle, but they were found in a folder of recently deleted items, the Chronicle said.

They stood watch over the suspect in the corridor, who tried to escape to his room, Mr Lee told The Straits Times.

Police said they received a call to assist at 2.07am. A 24-year-old man was arrested for "possession of obscene material", police said.

"Voyeurism is not tolerated in my hall and offenders will be handed over to the police," said Mr Lee, 22, a second-year engineering student. "The school and hall offices should upgrade the toilets in all the halls to prevent such incidents in the future."

Mr Lee also warned hall residents to be alert when they are showering.

This is the second incident of a peeping tom targeting at Hall 16 this year. Another suspected voyeur was caught, also by students, in the first quarter of the year.

Resident Khairul Anwar told The Straits Times that he used to take his time in the shower but now rushes through his bath.

"I was quite concerned as this is the second time this has happened here," said Mr Khairul, 23. "I also take more notice who I bump into in the toilet."