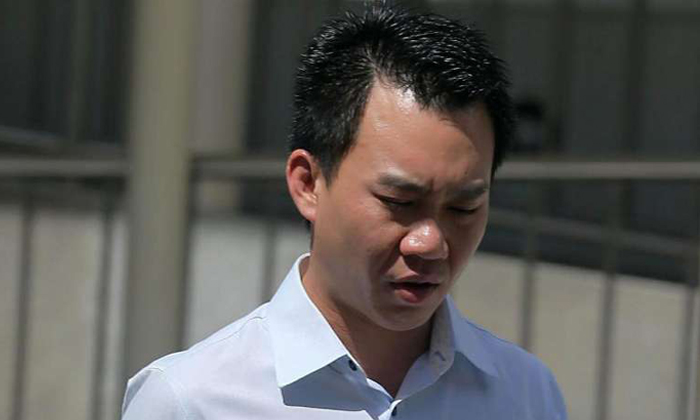 A sales account manager who took part in a racing competition with another motorist without a police permit was jailed for two weeks, fined $1,500 and banned from driving for a year on Wednesday (Nov 9).

Malaysian Sugath Lum Wai Yuen, 30, admitted to racing with Jandej Goh, then 19, along Seletar Link at about 1.25am on July 26, 2015. The Singapore permanent resident was behind the wheel of a white Audi S4 and Goh was driving his mother's black Mercedes C2000 saloon.

Goh, now 21, is now serving 12 months' supervised probation after he admitted to the offence. He undertook not to drive for 12 months.

The court heard that at 1.23am that day, some unknown persons flagged down Goh's car. An unknown passer-by asked if he wanted to "race with [their] S4'' .

After a brief conversation, Goh agreed to a "friendly match''.

Lum positioned his car on the centre lane of the three-lane Seletar Link while Goh's car was on the left lane.

After Goh sounded his horn three times to signal the start of the race, both vehicles took off, accelerating to speeds of about 175kmh. They stopped side by side to speak to each other when they reached the red light junction.

The distance covered by both Lum and Goh was about 1.5km. The whole incident was captured on footage by Goh's in-vehicle camera.

Lum's lawyer Sunil Sudheesan said Lum had gone to the incident location to collect certain documents from a co-worker. Before that, he did not know that there were racing competitions taking place, and neither did he intend to take part in any race at the time.

He said Lum was very sorry for what he had done, adding that it was a "momentary error'' and would not be repeated.

District Judge Kamala Ponnampalam agreed with Deputy Public Prosecutor Selene Yap that a clear and strong signal must be sent to the public to deter others from racing on public roads.

In passing sentence, she took into account the nature of the offence, the difficulty in detecting such offences and the speed at which those races were conducted. In particular, she noted that Lum's car was "several car lengths ahead'' of Goh, and the latter was already travelling at about 175kmh. She said it was fortuitous that nothing happened as the reaction time would be severely reduced, given the danger that such races pose on the roads.